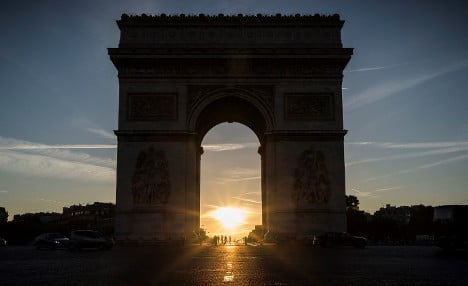 Donald Trump, who will arrive in Paris for his first visit as president, could expect a somewhat frosty welcome.

That's because the US president has been tweeting-off about France in recent months.

In February last year he provoked ire saying: “unfortunately France isn't what it was and Paris neither.”

And then in July, following the jihadist murder of a French priest, the newly elected president of the United States rammed the point home saying: “I wouldn't go to France. France is no longer France.”

And after the terror attack in Nice last year and the jihadist murder of a priest Trump said: “They won't like me for saying that but you see what happened in Nice. You see what happened yesterday with the priest, who is supposed to be a spectacular man. France is no longer France.”

But Trump's Air Force One plane touches down on Thursday for a two-day visit, during which he will be treated to haute-cuisine in a plush restaurant on the second level of the Eiffel Tower and he we can reassure him, that despite all the horrors of the last 20 months, France is definitely still France.

And it’s largely because the majority of French people defiantly won’t allow themselves to fall victim to the kind of reaction Trump would call for in the aftermath of a series of devastating terror attacks. (Muslims in France march in protest at the jihadist murder of two French police officers. AFP)

No, France hasn’t closed its borders to Muslims.

There have been some unsavoury incidents which saw some veil-wearing Muslim women verbally abused but the country’s five million Muslims are still free to wander the same streets as everyone else.

There has been no walls put up around the banlieues – the poor suburbs home to mainly poor North African immigrant communities.

There may be anger but communities have not turned on each other.

As the BBC's man in France Hugh Schofield put it previously: “Since the killings began, there have been no crowds on the streets of Nice or Paris chanting “Death to Islamic State”. Instead of flaming torches carried in angry procession, there are candles of remembrance.”

After Charlie Hebdo, the journalists who survived returned to work and published an edition one week after the attack. Members of the Jewish community still shop at the kosher stores around Paris.

Granted it took a few weeks, but Parisians returned to their favourite café terraces and music fans were soon snapping up tickets for concerts again, despite the horror of November 2015.

The Paris fashion show took place this year, so did the Cannes Film Festival and the Tour de France. Paris Plages beach festival is underway as usual and France is guaranteed to host the Olympics. When The Local visited Nice in the days after the attack, there were the usual sunbathers and strollers along the Promenade des Anglais. People told us of refusing to give in to fear.

And after the barbaric murder of a French priest in Rouen, religious leaders of all faiths got back behind the pulpit and preached unity, tolerance and even forgiveness for the teenagers responsible.

Of course it's far from all being rosy. Yes, we see soldiers on the street now and there are barriers around the entrance to police stations.

We have to have our bags searched more often and it definitely takes longer to get into a rock concert or a football stadium now. Some summer events had to be cancelled too.

The government has upped security and surveillance of course but as of yet it has refused to contemplate the idea of creating a “Guantanamo a la française” for anyone acting suspiciously. Instead it calls for cohesion and togetherness.

But on the whole Madame liberté is still alive and well, if a little concerned.

There’s no doubt the French are on edge and angry, we’ll give Mr Trump that. The atmosphere is sombre and with each attack we’re left wondering what’s to come. And there are worries that extremists –  with views no doubt similar to Trump's, give Isis exactly what they desperately want and react against the Muslim community.

But in the meantime most French carry on as normal because they are determined not to let a small number of individuals ruin their lives. (French beaches in the summer. AFP)

And in Paris this weekend, people will remember the victims of the terror attacks by going out and drink on terraces of bars and bistros. They will go to a concert at the Bataclan and a football match at the Stade de France. Paris is what it was.

So Mr Trump, despite all the problems it faces, both old and new, France is still France, and the French are determined to keep it that way.

We'll let the president have the last word as it was intended for you:

“France will always be France, because France will never yield and because France is always the bearer of ideals, values and principles, for which we are recognised throughout the world,” François Hollande said.

“When you lower your standards, you are no longer what you are. That's something that may happen to others, on the other side of the Atlantic.”

We look forward to your visit.

If anyone would like to demonstrate to @realDonaldTrump that France is alive and kicking, perhaps follow us and tweet some pictures of everyday life to him under the hashtag #FranceIsStillFrance.

Here are a couple to use. (Parisians head out of the city on holiday. AFP)

This article has been updated since it was first published in July, 2016.