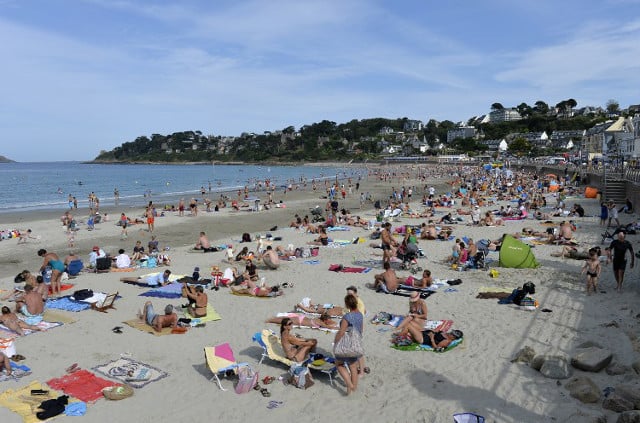 Photo: AFP
With three times more cases of skin cancer than the national average, the western region of Brittany, France's fourth most popular tourist destination, is more affected by the disease than anywhere else in the country.
And worryingly, the high figures include the most dangerous strain of the disease which can be identified by melanomas on the skin.
As a result people are being warned over the dangers by the charity League against Cancer (Ligue contre le cancer) which is running an awareness campaign throughout the month of July in Brittany towns.
“It's necessary to raise people's awareness, especially families, to the dangers of the sun,” Jean-François Tourtelier, a doctor and president of the League against cancer in the Breton department of Ille-et-Vilaine told 20 Minutes.
Tourtelier says the reason why Brittany has higher rates is mainly down to the fact that sunseekers are often deceived by the clouds and the wind in the region and think there's no need to cover up or cover themselves in sun cream.
While holidaymakers in the Mediterranean might instinctively cake themselves in suncream, those who head to Brittany often don't bother and can pay the price.
“We expose ourselves to the sun sometimes without even realizing it,” said Tourtelier.
The lesson is clear: don't be deceived by the wind and clouds often seen in the region and always take precautions.
Each year, more than 80,000 new cases of skin cancer are diagnosed in France, 14,350 of which are of the melanoma variety.
READ ALSO: And according to the League against Cancer this translates into 1,800 deaths each year.
In Brittany alone in 2014, 1,305 cases of skin cancer were registered in the region, representing three times the national average. In the south east of France around the French Riviera, 585 cases were registered during the same period.
The increased risk of getting skin cancer in Brittany isn't just a result of its sunny climes, however, it's also partly to do with the Celtic origins of its inhabitants.
“Their skin is whiter and as a result more fragile, especially among the youngest people,” said a specialist from Rennes university.
Many studies have shown the danger of over exposure during childhood leading to greater risk as an adult.
People are recommended to avoid the hottest hours, to avoid exposing themselves for the whole day, even when wearing suncream, and to pay particular attention to children.

PARTNER CONTENT
Winter is coming: How to stay happy and healthy
Url copied to clipboard!