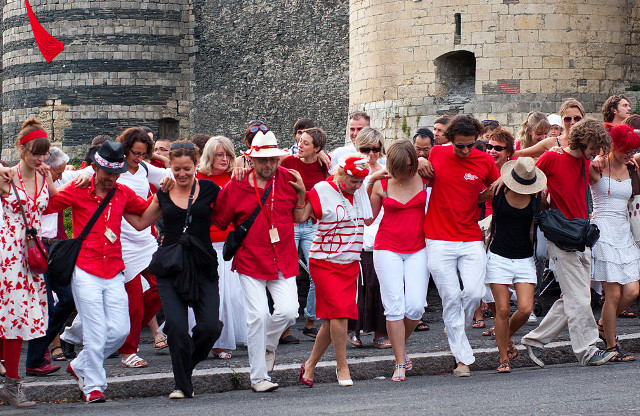 Photo: Simon Bonaventure/Wikicommons
The organisers of a French street festival in the western city of Angers are planning to hold a referendum on whether England should form a union with the historical and cultural region of Anjou.
England and Anjou were last united for around a century from the mid-twelfth to mid-thirteenth centuries.
And the people behind the annual Accroche-Coeurs festival will this year be asking people in Angers, as well as online voters, to cast their votes on the question, “Do you agree with the reunification of England and Anjou?”.
The vote is set to take place on September 8-10th at the annual theatre, dance, circus and fine arts festival, with this year's theme appropriately entitled, 'So British!'.
“Several months ago, the United Kingdom launched a referendum to find out if the British wished (or not) to stay at the heart of the European Union,” Calixte de Nigremont, the festival's official master of ceremonies said.
“Since then, over the past few months, a number of unexpected developments have occurred: a change in government, a loss of political cohesion, new elections, economic difficulties weakening of the Brexit camp, all of which has led the British to question their choice and doubt whether they should leave the EU.”
As a result of all this perceived doom and gloom across the channel, the organisers are suggesting that the time might be ripe to turn the clock back nearly and recreate a union last seen during the English Plantagenet dynasty, also known as the house of Anjou or Angevin dynasty.
“Today, based on historical ties which once united England and Anjou, it seems important that we take up the initiative once more and propose a strong, structured and ambitious project, at the same time as allowing the English to leave this crisis with their heads held high,” the festival organisers said.
This isn't the first time the organisers of the festival have made headlines. In 2012 The Local reported that they had launched a petition to 'reclaim' the British crown jewels that was signed by 2500 people in the town of Angers.
At its grandest, the Plantagenet or Angevin dynasty controlled England, parts of Ireland, Scotland and Wales and the entire western side of France. The dynasty's heartland was in Angers and Chinon, where the monarchs traditionally held court.
Url copied to clipboard!