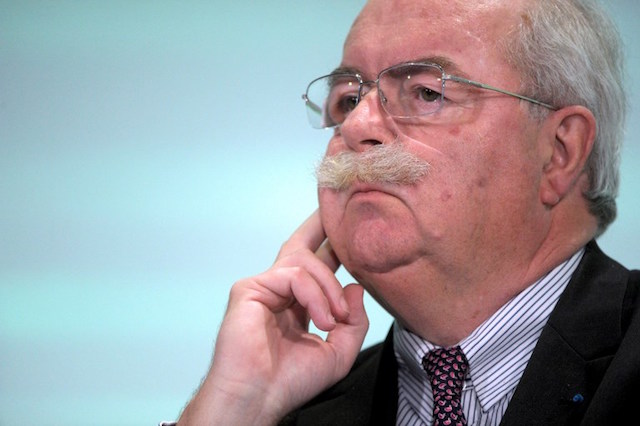 Christophe de Margerie in 2014. Photo: Eric Piermont/AFP
Christophe de Margerie was killed along with two pilots and a flight attendant when his private jet crashed into a snowplough at Moscow's Vnukovo airport.
READ ALSO: Total's 'Big Moustache': Not your average oil exec
The principal suspect Vladimir Martynenko who was accused of driving the snowplough while drunk and engineer Vladimir Ledenev, who was in charge of the snow-clearing, pleaded guilty.
Their cases were heard separately from three other suspects.
Judge Yelena Vereshchagina of the Solntsevo district court in Moscow sentenced Martynenko and Ledenev to four and three and a half years in prison respectively but freed them under a 2015 amnesty law and dropped all charges.
The Russian parliament in 2015 adopted a general amnesty to mark the 70th anniversary of Russia's WWII victory.
It exempted from punishment several categories of people convicted for the first time on light charges as well as people sentenced to up to five years for crimes done unintentionally.
Martynenko earlier on Friday confirmed his guilty plea.
“I am guilty, I understand 100 percent it's my fault. I ask forgiveness of all who have suffered,” he told the judge before the verdict.
Speaking to journalists later, Ledenev said his sense of guilt would remain.
“I don't feel any relief, only guilt.”
De Margerie was 63 and led Europe's third-largest oil company when he was leaving Moscow on October 20, 2014, after meeting Prime Minister Dmitry Medvedev when the accident happened.
READ ALSO: Total chief warns against Arctic drilling
Investigators said the Falcon-50EX plane crashed after hitting the snowplough that was on the runway as it was taking off in foggy conditions.
The judge added that Vnukovo airport and Unijet company which operated the flight deserved compensation for damages in the amount of one million rubles ($16,500) and 515 million rubles ($8.5 million) respectively.
The compensation will be studied by the court separately.