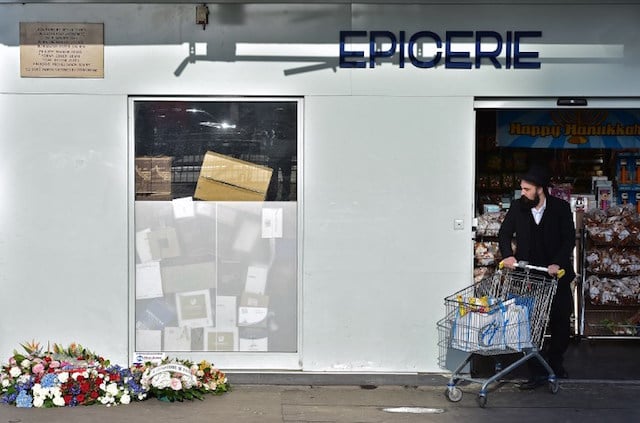 A man pushes a trolley as he walks out of the Hyper Cacher supermarket following a ceremony marking the second anniversary of the deadly attack against it in Paris on January 5th, 2017. Photo: Christo
DNA testing found samples from the man, identified as Abdelaziz S., on one of the weapons used by Amedy Coulibaly, who killed four people after taking shoppers hostage at the Hyper Cacher market.
He was detained in a Paris suburb on Wednesday and is being held on charges of criminal association with terrorists.
“During questioning, the suspect failed to provide any satisfactory explanation about why his DNA was found inside the weapon, but he insists he knew nothing of Coulibaly's plans,” the source said.
Two women, aged 23 and 31, who were also detained by investigators earlier in the week, have been released.
The attack on the Jewish store on January 9th came a day after Coulibaly killed a policewoman, and a few days after the assault by other jihadists on the Charlie Hebdo satirical magazine offices that killed 12 people.
READ ALSO: 'I'm partly to blame for Charlie Hebdo attack': Ex-French jihadist
According to investigators, the Tokarev handguns and an assault rifle used by Coulibaly were purchased by a company owned by the wife of a suspected arms trafficker, Claude Hermant.
Hermant, a former mercenary during the wars in the former Yugoslavia, claims to have sold them on to another suspected trafficker, identified as Samir L., in a deal aimed at infiltrating a network, a sale which had the blessing of the French police.
Samir L. was one of several people charged in the months following the Hyper Cacher attack for helping Coulibaly obtain the weapons, though all have denied any knowledge of his plans.
Hermant and his wife have been called in twice for questioning in the inquiry, but no charges have been filed.