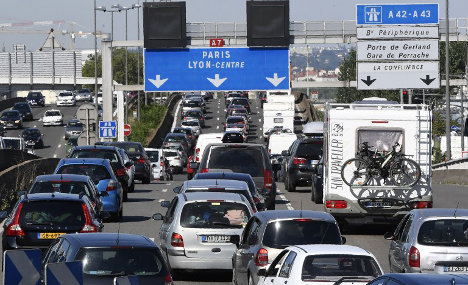 France’s traffic info service Bison Futé is advising motorists to avoid travelling on Saturday, when tens of thousands of holidaymakers will head out of cities towards the coast or countryside.

The service has classed Saturday as red – the second highest level before black – meaning travelling on roads out of all major French cities will be “very difficult”. Friday, the last day of school, has been classed as orange, meaning the roads will be “difficult” for most of the country, but Paris and its surrounding Ile-de-France region is classed as red, with thousands set to leave the capital after work on Friday afternoon and evening. The main motorways heading south to the Mediterranean, such as the A6, are expected to be particularly problematic on Friday evening and all day Saturday.

The motorways A6, A7, A40, A41 et A43 could be problematic for drivers throughout the weekend.

Bison Futé is advising holidaymakers to delay their journeys until Sunday if possible, when the roads are expected to be clearer.

Or if you really want to leave Paris on the Friday then go before midday.

Other advice given out by Bison Futé is to avoid the areas around all big cities between 4pm and 8pm on Friday as well as the A7 autoroute between Lyon and Orange between 10am and 7pm.

For those insist on leaving on Saturday then they are advised to go before 6am as most people head away in the morning and early afternoon.

The traffic service has already released its forecast for the summer months and included a list of days when driving really should be avoided.

Certain days in the summer, notably the famous crossover on Saturday July 29 – when July holiday makers return home and those who go away in August take to the roads – have been classed black. CLICK HERE for more information on the days to avoid.

The prospect of being stuck in traffic jams this weekend is made worse by the fact that the country is experiencing some scorching temperatures and parts of central and eastern France are on alert for heatwave. The departments of Ain, Allier, Isère, Jura, Loire, Puy-de-Dôme, Rhône and Saône-et-Loire are all on alert for scorching temperatures which are expected to last until Sunday.

Forecasters say temperatures will hover around the mid thirties but in certain areas on heatwave alert they could touch 40C.