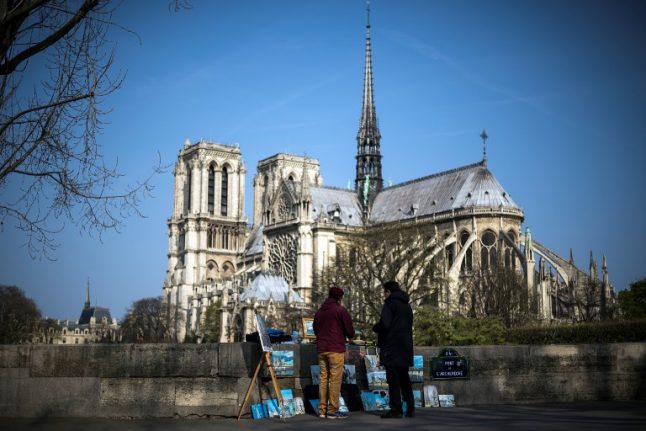 Victor Hugo would be appalled to see the ravages inflicted by time, pollution and weather on his beloved Notre Dame, the soaring cathedral that adorns the heart of Paris. With its twin towers, stained-glass windows, gargoyles and flying buttresses — a colossal achievement that took more than a century to complete — the cathedral is a UNESCO World Heritage site that draws between 12 and 14 million visitors each year.

Gargoyles that have lost their heads have been fixed up with unsightly plastic tubes for water drainage. Elsewhere, an entire stone balustrade is missing, replaced by plywood; a pinnacle has crumbled and a stained-glass window's frame is in a sorry state of repair. Decorative details that have fallen away from flying buttresses have been set aside for safekeeping.

The central lead-clad wooden spire, which rises 93 metres (300 feet) above the cathedral roof and weighs 250 tonnes, is also in need of costly restoration.

The lead, meant to protect the spire from the elements, is wearing thin, noted government conservationist Marie-Helene Didier. Paris is sounding the alarm, seeking donations notably from US patrons to help pay for the work, pledging to match up to four million euros donated to a heritage fund.

Through the Friends of Notre-Dame de Paris group, Paris's Roman Catholic diocese is reaching out to Americans “who have a culture of giving and are very attached to this monument”, Andre Finot, a spokesman for the cathedral, said.

Finot, who knows Notre Dame's every nook and cranny, is leading the funding drive.

“It's really urgent,” he told AFP, during a tour of the devastation caused by air pollution and acid rain. “You realise that (state funds) are not enough.”

By his estimate, the bill could come to at least 150 million euros over 30 years. American tourists are particularly enthralled by Hugo's Quasimodo and other characters in “The Hunchback of Notre Dame”, immortalised in myriad films, plays and musicals.

“We are not in a situation of danger, we still manage to handle the most urgent needs,” said Didier. But private donations “would allow us to speed up the work.”

While France is spreading the net wide in search of contributions, “we will still be appealing to the French,” Finot said. “They should be conscious of the incredible heritage they have.”