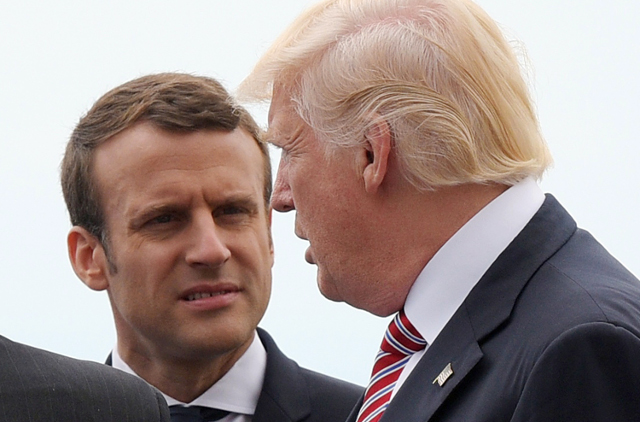 New French President Emmanuel Macron is trying to serve as a bridge between Europe and Donald Trump, seeking to influence and understand the US president amid widespread confusion in Paris about his intentions.

Macron, a 39-year-old centrist elected in May, has invited Trump to be his guest of honour at the Bastille Day military parade in Paris on July 14, leading to criticism from some quarters in France.

The two men have sharply different backgrounds, ages and views and have already tussled over Trump's decision to withdraw the United States from the global Paris agreement on combatting climate change.

French government spokesman Christophe Castaner told the LCI channel on Thursday that the invitation to Trump was in honour of the United States, France's ally and liberator in the two world wars of the last century. “There's also a strong political dimension. Emmanuel Macron wants to try to prevent the president of the United States being isolated. He (Trump) sometimes takes decisions that we disagree with, on climate change for example,” Castaner added.

“But we can do things: either you say 'we're not speaking because you haven't been nice' or we can reach out to him to keep him in the circle,” he explained.

Trump has poor relations with German Chancellor Angela Merkel and will be the centre of attention in what is expected to be a stormy G20 meeting between leading nations in Hamburg, Germany, on Friday and Saturday.

Trump and Macron first met at NATO in Brussels in May where they exchanged a muscular handshake which Macron later described as “a moment of truth.”

French green member of parliament Yannick Jadot has called Macron's decision to invite Trump “a symbolic reward unworthy of the US president who has stuck his fingers up at humanity by withdrawing from the Paris climate agreement.” In the French foreign ministry, diplomats complain that they frequently struggle to understand US policy on important issues such as the stand-off between Saudi Arabia and Qatar, NATO or North Korea.

“We're still waiting for our counterparts to be named,” one senior diplomat told AFP on condition of anonymity, referring to more than 100 vacancies which still haven't been filled at the State Department.

And while Tillerson's predecessor John Kerry stopped off in Paris regularly during his travel, officials in the French capital are finding it difficult to set up meetings with the new secretary of state in the Trump administration.

One area which has been working normally is the fight against jihadists where France is partner in the US-led international force operating in Syria and Iraq. But some French diplomats worry about an absence of vision. “It's a bit: let's fight the war for the moment and then we'll see,” said another diplomat on condition of anonymity.

And the withdrawal of the US from international diplomacy under Trump could also present France with opportunities on the world stage, which Macron has made it clear he intends to seize.

“There needs to be cooperation (with the US) in a pragmatic and opportunistic way,” said Alexandra de Hoop Scheffer, a specialist at the German Marshall Fund think-tank in Paris. “In this sense, the invitation by Macron to Trump for July 14 is an excellent idea.”