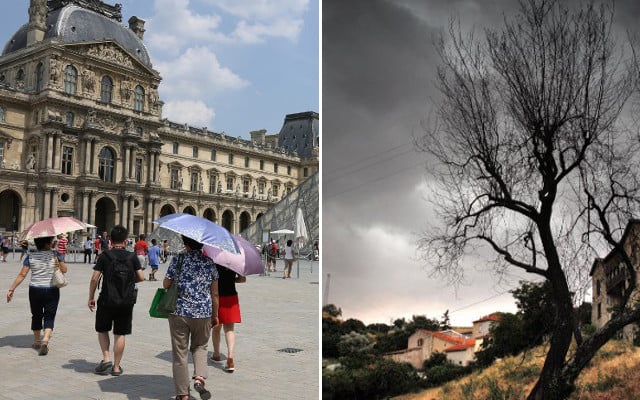 Photos: AFP
A huge swathe of central France was placed on heatwave alert on Thursday, the north of the country was due to be hit by violent storms, with a total of 16 departments in France on alert due to the extreme weather conditions.
The eight departments of central France placed on alert for a heatwave are Ain, Allier, Isère, Jura, Loire, Puy de Dôme, Rhône and Saône-et-Loi. Map: Meteo France
These departments join eight others in the north of the country, which have been on alert for the past 16 hours, although for a very different reason.
Oise, Somme, Aisne, Ardennes, Marne, Seine-Maritime, Nord and Pas de-Calais have been on orange alert for storms, the second highest level of warning, meaning that people should be vigilant.
Seine-Maritime and Charente-Maritime have already been hit by stormy showers on Thursday morning.
“Light storms have been circling the north of the country during the morning. After a lull around midday and at the beginning of the afternoon, the weather will become hotter and muggier” which leads to storms, Meteo France explained. Map: Meteo France
In the areas of the country  on alert for storms, the national weather agency warned that wind speeds could reach 100km/h.
The storm alerts are expected to be lifted on Thursday night or Friday morning.