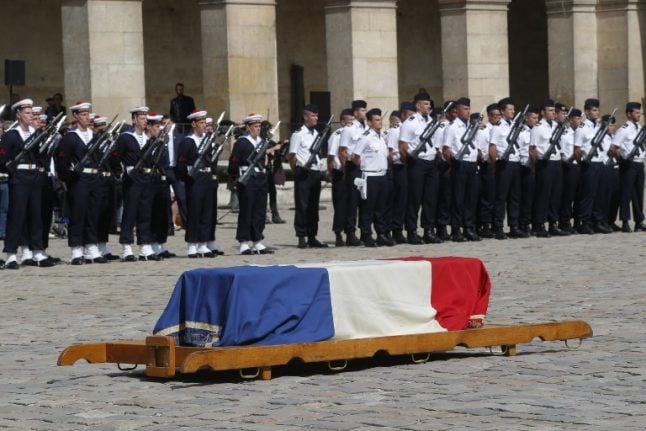 Photo: AFP
France paid homage to one of its greatest female figures on Wednesday at a national ceremony at the famous Invalides monument in the heart of Paris.
Dignitaries and politicians from France and around Europe gathered to pay their respects to Veil, who in the words of President Emmanuel Macron led “all the struggles of the last century – for women, Europe, justice and human dignity.” (Veil's coffin is carried into the Invalides)
The coffin of the beloved politician, who died aged 89 on June 30th, arrived at the Hotel des Invalides – which houses Napoleon's tomb – draped in the French flag and carried by Republican guards to the sound of Chopin's Funeral March.
The French president Emmanuel Macron delivered a speech in honour of Veil, who was voted the country's most admired woman in a 2015 poll. Macron paid tribute to Veil's “astonishing life” saying France reserved a word for people like her – “greatness”.
The president said Veil's battles, notably to legalize abortion in France, were the “combats of the century”. “She loved Europe, she always defended it because she knew that at the heart of this dream, there was above all this wish for peace and freedom for which she fought so hard,” Macron said.
“Madame, you have lavished upon our nation gifts which have made it better and more beautiful country,” Macron added.
“It is France and the whole of Europe who can testify to your struggles, I ask you to receive the thanks of the French people. “
(Simone Veil's sons Pierre-François and Jean Veil.)
READ ALSO: Expressing his condolences on Twitter on June 30th, the president had tweeted: “May her example inspire our fellow citizens, as the best of what France can achieve.”
Ex-French presidents Nicolas Sarkozy and Francois Hollande will be at the event, as will Jacques Chirac's wife Bernadette, who will be representing her husband. Nearly all of France's recent prime ministers are expected to be there, as are members of the Foundation for the memory of Shoah, of which Veil was the first president.
Across France the European flag will be lowered to half-mast on public buildings while the French flags will be covered in black.
Since Veil's death, more than 120,000 people signed two French petitions calling for her to be buried in the Pantheon.
It was initially thought Veil would be buried at Montparnasse alongside her husband but Macron announced both would be laid to rest in the Pantheon.
Born Simone Jacob in the Mediterranean city of Nice, Veil was deported to the Nazi death camp at the age of 17 with her entire family.
She is best known for leading the successful campaign to legalize abortion in France. This was back in 1975, when she was France's minister of health (incidentally, she was France's first ever female minister too).
In 2015, The Local reported that she was voted France's most admired woman.
Url copied to clipboard!