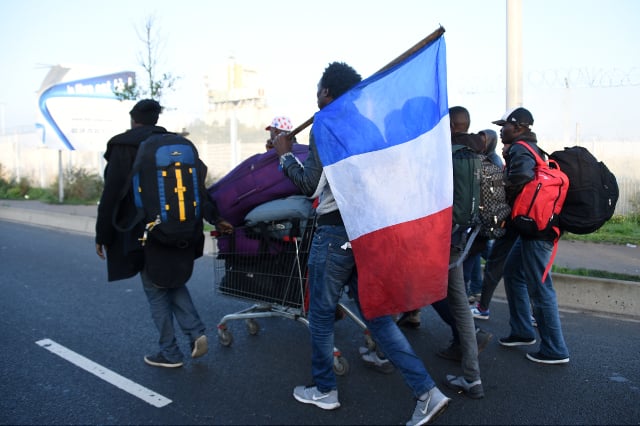 Migrants during the evacuation of a makeshift camp near La Chapelle in Paris. Photo: AFP
France's new president clearly has some healing to do when it comes to two longstanding divisive issues in France.
Immigration and the place of Islam in society, are still very much contentious questions for the French, a new annual survey has revealed.
A poll by the Ipsos institute for Le Monde newspaper has revealed that a majority of 65 percent of French people say there are too many foreigners in France, a figure that has remained elevated in recent years, with the figure as high as 70 percent in 2017.
Another stat demonstrating a majority of French people are uncomfortable with immigration was the 60 percent of people who agreed with the statement: “Today I no longer feel at home like I did before”.
On top of that some 61 percent of French people share the belief that “immigrants in France do not make an effort to integrate”.
Some 46 percent of French people believe it's not difficult for an immigrant to integrate.
Unsurprisingly the percentages are far higher among those on the far right  – 95 percent of National Front voters believe there are too many foreigners in France compared to those on the left (46 percent of Socialists).
When it came to the other ever divisive issue of the role of Islam, 60 percent of the people questioned for the survey titled “French Fractures 2017″, believe the religion of Islam is incompatible with the values of the French Republic”.
However perhaps views are softening given that in 2017 the figure was up at 74 percent. In a separate question some 78 percent of French people are of the view that Islam “seeks to impose its way of life on others”.
Regarding radical Islam, 46% of the French polled said that “even if it is not its main message, Islam still contains within it the seeds of violence and intolerance”.
That reflects a jump of five percentage points on last year's survey.
France has been at the receiving end of a string of Jihadist terror attacks in recent years, including the November 2015 attack at the Bataclan which claimed 150 lives.
The repeated terror attacks, which have exposed the deep insecurity around “l'identité nationale”, have led to demands for foreigners to assimilate, rather than just integrate into the French way of life and culture.
In September 2016, The Local reported that French politicians were aggressively demanding immigrants drop their own identities and assimilate into French culture and way of life.
Rows over the influence of Islam regularly flare up in France, whether its over the wearing of the veil, school dinners for Muslim pupils or most notably the wearing of burkinis on French beaches, an issue which made global headlines last Summer when the swimwear was banned by around 30 French mayors last year.
READ ALSO: France has had a longstanding tradition of demanding immigrants assimilate, dating back to the 19th century when it was used as a policy towards its Jewish population and then towards colonized countries.
In August 2016, The Local reported that another poll by Ipsos showed that just 11 percent of the French felt that immigration had an overall positive impact; with an average figure over the 22 countries surveyed of 20 percent, ranging from six percent in Turkey to 36 percent in Canada.