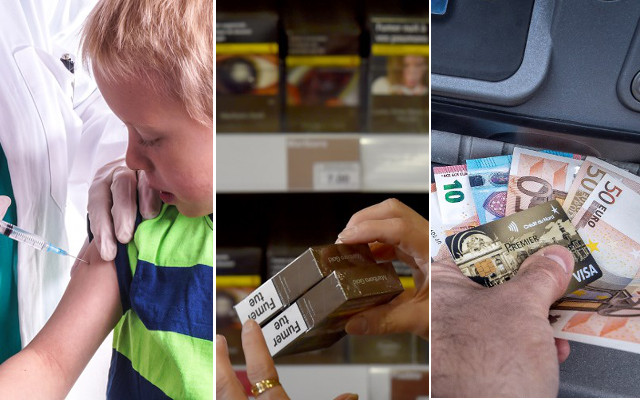 Photo: AFP
Prime minister Edouard Philippe laid out the government's plans for France in a speech in front of the French parliament on Tuesday.
Here are the main changes planned.
The price of cigarettes will steadily rise to €10
This is part of the government's battle against tabacco. The current price of a packet of cigarettes in France is €7.
Health minister Agnès Buzyn said that her aim is “for the children born today to be France's first generation of non-smokers.”
Vaccines for children will be obligatory
Highlighting the fact that some diseases “have returned to France”, Philippe said that vaccines for young children that are unanimously recommended by health authorities will become obligatory from 2018. The Local has already reported that this was a priority for the French Health Minister. Reimbursement of glasses, dental healthcare and hearing aids
The prime minister has said that from now until the end of the five-year term, French people will no longer pay for glasses, dental healthcare and hearing aids.
The state of emergency will end on November 1st
Echoing the words of France's new president, Emmanuel Macron, the prime minister said in his speech that the state of emergency will come to an end on November 1st and at the same time a new raft of anti-terrorism laws will be introduced.
The baccalaureat will be reformed
Philippe assured MPs that the baccalaureat – the exams taken by most French 18-year-olds at the end of their time at the Lycée, or upper secondary school – will be reformed by 2021.
National Service
The government will introduce a new national service for young people, as President Emmanuel Macron had promised during his election campaign. The government will reflect on the form the new national service will take over the coming months.
Environment
As part of a pledge to become carbon neutral by 2050 France will no longer give licenses for oil and gas exploration. And 100 percent of plastic will be recycled in France by 2025.
Employee contributions to be cut for low paid workers
Deductions taken from the lowest paid workers will be cut with the aim of giving those on the minimum wage (Around €1,480 a month) greater spending power. Philippe said the cut would save those on the minimum wage €250 a year.
France to cut corporate tax to 25 percent by 2022
The French government will progressively slash corporate tax from 33.3 percent to 25 percent by 2022. Businesses must want to set up and develop on our territory rather than elsewhere,” Philippe told parliament, adding the corporate tax cut will bring France “in line with the European average”.
Universal access to high-speed internet from 2022
Philippe promised that access to high-speed internet would be guaranteed across the whole of France by the end of his five-year term. Public spending must be cut
French Prime Minister Edouard Philippe told parliament Tuesday that the public debt, currently running at 2.147 trillion euros, was “intolerable”.
“We are dancing on a volcano that is rumbling ever louder,” Philippe told the newly elected National Assembly, announcing plans to wean the French off their “addiction to public spending”.
Council tax (taxe d'habitation) to be reformed
Philippe highlighted council tax in his speech, calling it “unfair” and saying that it will be reformed during his time as prime minister.
This reform, which will be consulted on with local authorities, will in turn increase the majority of the French people's spending power.
Some social benefits to increase
The prime minister laid out plans to increase benefits for disabled adults and raise the minimum benefit for the elderly from 2018.
France to launch 50-bn-euro investment plan
France will launch “a grand investment plan” worth 50 billion euros ($56.7 billion) in areas including the environment, health, agriculture and transport.
Stressing the importance of “investing in the sectors of the future”, Philippe told parliament that the package would also focus on developing skills.
Regulations around new housing to be relaxed
A law will be introduced in the autumn simplifying the procedures around building housing. In his speech, Philippe promised fewer obstacles in the granting of construction permits.
Defense budget will amount to 2 percent of GDP
France's defense budget will be brought to 2 percent of the country's GDP.
France to meet EU deficit targets
Philippe also reiterated the government's ambition of bringing the deficit within an EU limit of 3.0 percent of GDP this year.