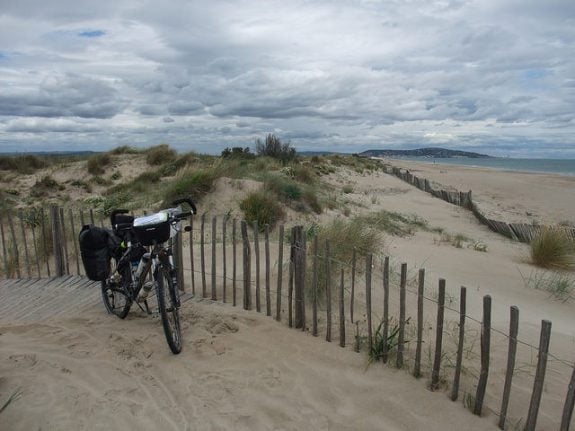 Cycling has never been so popular among tourists visiting France.

With over a million kilometres of road across France it can be tough to choose which stretches are the best bets for cycling this summer.

Natasha Wright, who runs the bike rental and delivery service Bike Hire Direct with her husband Neville, tells us her 10 places to get on a bike in France. The Charente Valley stretching from Angouleme to Saintes is perhaps one of the best kept secrets of south west France. Although it is possible to cycle the whole stretch, one of our favourite parts is around Jarnac. There are several marked routes starting from this historic town, taking in the Cognac vineyards, sunflower and melon fields, an abundance of Romanesque art and of course, as Henry IV declared: ‘The most beautiful stream in the kingdom’. One of our favourite stretches of the 1400km Velodyssee is between La Rochelle and Royan in the Charente-Maritime. Starting from the famous towers defending the historic port of La Rochelle, along the bay of Châtelaillon before heading inland to the ‘royal city’ of Rochefort, the route enters the oyster centre of Marennes before weaving through the coastal forest, cliffs and beaches of the Côte de Beauté, and entering the seaside paradise of Royan. The famous medieval town of Sarlat, the capital of the black Perigord, is a great starting point to explore some of the stunning Dordogne landscapes. Located beneath overhanging cliffs, la Roque Gageac is renowned as one of Frances prettiest villages, whilst nearby along the looping river Dordogne is the imposing castle at Beynac-et-Cazenac. Inland, Les Eyzies-de-Tayac, a UNESCO World Heritage site, lies in the Vézère Valley, famed for its prehistoric caves. In the Vienne region of the Poitou-Charentes , the fortified medieval town of Chauvigny, is the starting point of this circuit of the Valley of the Vienne river. Heading south towards Lussac-les-Châteaux, you are travelling through an area rich in prehistoric sites with some findings dating back to 15000 BC. Meandering back along the Vienne river, you cannot fail to be seduced by the magnificent Château de Touffou. The Saint Pardoux lake is a man-made reservoir covering 330 hectares in the Haute Vienne region of Poitou Charentes. The lake has a 28km shoreline, and there are 50km of marked trails around it. The 24km biking circuit is named after a famous French cyclist, André Dufraisse, and offers a variety of landscapes. You find yourselves cycling though moorland and forests, but always within touching distance of the lake itself. The Canal du Midi is a UNESCO World Heritage site, bordered almost all of its 240km length by striking plane trees, through a landscape rich in history, linking Toulouse to the charming port of Marseillan on the Mediterranean. This is a perfect cycling route, along flat, car free paths taking in the medieval fortified city of Carcassonne, Gothic Narbonne, and Romanesque Beziers, whilst pedalling through an ever changing landscape of vineyards, sunflowers and lavender. Another great stretch of the 1400km Vélodyssée, starts on the magnificent Arcachon bay, overlooked by the great Dune du Pilat and then meanders between lakes, forests and the pretty seaside resorts of the region such as Biscarrosse, Mimizan and Leon. It follows the beautiful surfing beaches through the iconic resorts of Seignosse and Hossegor and the lively port of Cap-Breton, before heading into the Basque country. Eurovelo 6 is a 3600km trans-European cycle route linking the Atlantic Ocean to the Black Sea, which follows three of Europe’s great rivers (the Loire, Rhine and Danube). The 77km stretch between Tours and Blois provides a perfect journey into the history of France. From the royal chateau in Ambroise to the manor house where de Vinci lived, the pagoda at Chanteloup to the magnificent chateau at Chenonceaux, and finally into majestic Blois. The bike friendly city of Bordeaux is an ideal base for exploring this famous wine producing region. The cycling heart of the city is the 5km stretch of riverfront, from which you easily access the medieval streets or the neo-classical splendour of the Parliament area. There are numerous routes to explore out of Bordeaux, such as the famous Roger Lapébie cycle track on a disused railway line where the old stations have been transformed into restaurants and wine bars. Although most famously known as a marquee stage of the Tour de France, the iconic corkscrew ascent from Bourg d’Oisans to Alpe d’Huez is such a stunning ride that thousands of cyclists, occasional riders as well as professionals, will climb this Mecca of cycling each year. The 21 smooth bends, with stunning views of the Oisans valley, mean you climb 1150 metres at an average slope of 7.9 percent over the 15km ride. The numbers mean very little compared to the exhilaration of the ride.