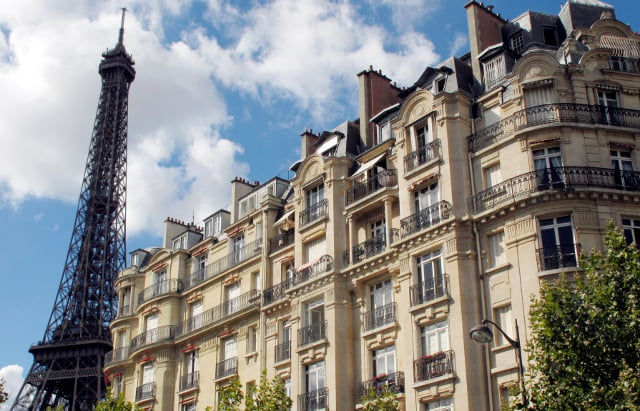 Photo: AFP
From December authorities in Paris plan to force people renting out their apartments on short-term apartment rental websites like Airbnb to first to register the property at the City Hall.
The new rule which looks set to be voted through unanimously by the Paris City Council this week, aims to target landlords flouting France's 120-day legal limit set for renting out primary residences.
“The landlords will be able to register from October 1st, and from December 1st, the step will be obligatory,” explained Ian Brossat, the deputy in charge of housing at Paris City Hall.
It could also put an end to tenants putting their apartments on Airbnb without the permission of the owners.
Paris is taking advantage of an update to France's internet laws that now allow cities and towns with more than 200,000 residents – and the area immediately outside Paris known as the “Petite Couronne” – to monitor the short-term rental market using registration numbers.
READ ALSO: Photo: AFP
If the new law is brought in, authorities have said it would be impossible to cheat the system. Rental platforms will be expected to fall into line and delete landlord profiles if they are found to be exceeding the legal limit.
This is a problem French authorities have been struggling with for some time, with a survey carried out at the end of 2015 finding that across France, 44 percent of the homes advertised on Airbnb were permanently available for rental.
Like a lot of big tourist cities, Paris has stepped up its initiatives to crack down on renting out properties to tourists illegally, which is threatening the country's hotel sector and encouraging real estate speculation.
The online rental industry is also linked with leaving certain areas of cities empty and is considered the root of daily disagreements around problems caused by people “moving in” temporarily.
“At the moment, it's very difficult to monitor if the law is being respected,” said deputy mayor of Paris Bruno Julliard, noting that each property will only be able to be registered once.
The city authorities are not against the fact that some Parisians “want to boost their finances at the end of the month” or during their holidays, Juillard added, saying that the large majority of apartments are being rented out for short stays but that it must be monitored in case of “abuse”.
But not everyone is in favour of the move, with a national union promoting the holiday rental industry (UNPLV) telling Agence France-Presse that “no legal document obliges the platforms to give city authorities figures on the number of nights a property is being rented out.”
However Juillard has stated that the authorities are “determined to regulate this market,” indicating that further discussions are ongoing to reduce the 120-day limit.
Unsurprisingly, Paris is one of Airbnb's top markets with 65,000 properties listed and this isn't the first time it has attracted the attention of the authorities.
In October, lawmakers in France voted that those who use sharing economy websites like Airbnb to make money, must be treated as “professionals” and therefore pay the tax man.
And in a bid to shame the people breaking the legal limit for renting out their home, in 2016 officials took action in the form of an interactive map, listing all the Airbnb users who have officially registered their homes as long-term rentals.
In January 2016, the city also carried out “raids” on apartments in the 1st and 6th arrondissements – both hugely popular areas for tourists, following similar measures previously taken in the Marais in 2015.