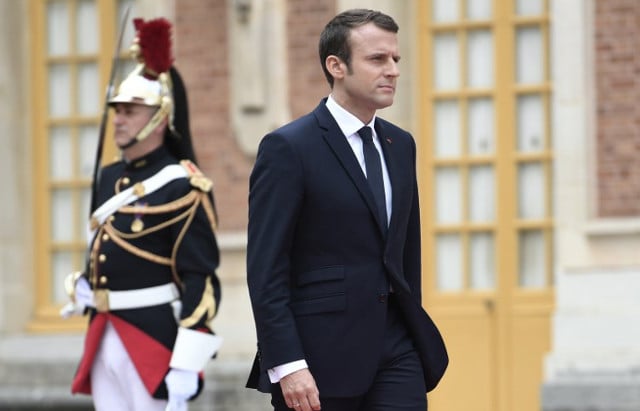 Photo: AFP
Macron will use the speech, which has been billed as a novel, US-style state of the nation address, to set out his vision for a French “renaissance”.
But the message risks being overshadowed by the unease over the growing concentration of power in the presidency, with his speech to a rare sitting of the National Assembly and Senate seen as proof of his “monarchical” drift.
The address in the former seat of kings by the self-styled revolutionary comes a day before premier Edouard Philippe delivers the government's traditional policy statement to the newly-elected 577-seat National Assembly.
The press and opposition have accused 39-year-old Macron of pulling the rug from under his premier's feet, to assert his dominance, and slammed his refusal to take questions after his remarks.
READ ALSO: Macron on the inaugural high-speed Paris-Rennes journey. Photo: AFP
A media darling during his campaign, Macron has kept the press at arm's length since his election, keen to avoid the excessive exposure that turned voters off his predecessors Francois Hollande and Nicolas Sarkozy at the risk of appearing aloof.
He used the Louvre museum — a former royal palace — as the backdrop for his victory party in May and hosted Russia's President Vladimir Putin for talks in Versailles.
Jean-Luc Melenchon, the rebellious leader of the leftist France Unbowed, accused “Macron the pharaoh” of crossing a line in his “monarchical” approach to the presidency and declared his party would boycott the speech, as did the Communist Party and two members of the small centrist UDI party.
“The hyper president,” Le Parisien wrote on its front page Sunday, above Macron's official photograph, showing him standing at his desk.
“He decides everything, monopolises the stage, controls the
communications,” the paper wrote.
Efficiency over debate
Presidential addresses to both houses of parliament are rare events in France, used mainly in times of crises.
Sarkozy and Hollande each gave one — during the eurozone crisis for Sarkozy and after the November 2015 attacks in Paris for Hollande.
Philippe attempted to downplay the controversy over the timing of Macron's address, coming a day ahead of his, insisting there was no overlap.
“The president of the Republic … will set the course on Monday. It is then up to ourselves, as members of the government to achieve it,” he said.
Macron's speech comes days after the government unveiled a bill that would allow it to fast-track labour reforms through parliament — where Macron's Republic on the Move party has a resounding majority — using decrees.
Some opposition parties have accused him of neutering parliament.
“When you do not share power you may be more efficient but you are also perhaps a little less democratic,” Christian Jacob, the parliamentary leader of the main opposition Republicans, said.
Pascal Perrineau, political scientist at Sciences Po university's Cevipof research unit told AFP the president's control over the office of prime minister, the government, the ruling party and assembly was “characteristic of Macronist politics”.
After promising in his campaign manifesto “Revolution” to maintain a balance of power between the presidency and parliament, Macron had created a relationship of “subjugation”, Perrineau added. 'Schizophrenic mix'
A relative newcomer to politics who won election on a tide of disaffection with mainstream politics, Macron has enjoyed a honeymoon with voters, drawing particular praise for standing up to US President Donald Trump and Russian
leader Vladimir Putin.
But a Kantar Sofres-Onepoint poll published Thursday showed his approval ratings already starting to dip, falling three points in a month to 54 percent.
More alarmingly for a president hoping to dispel the gloom that has shrouded France for years, a No Com/Ifop poll Sunday showed only 44 percent of the French felt optimistic about the country's future, down eight points from May.
“We're seeing a strange, almost schizophrenic mix, of goodwill and distrust (towards Macron),” No Com co-founder Pierre Giacometti told Le Journal du Dimanche weekly, adding: “The French already want results.”
On Monday, Macron is expected to defend his bid to liberalise the labour market as necessary to bring down unemployment, currently running at 9.4 percent. His aides told the JDD he would also set out his vision for France's place in Europe.
A day later Philippe will sketch out the details of their planned reforms, including areas where savings can be made to try to tame France's excessive
deficit.