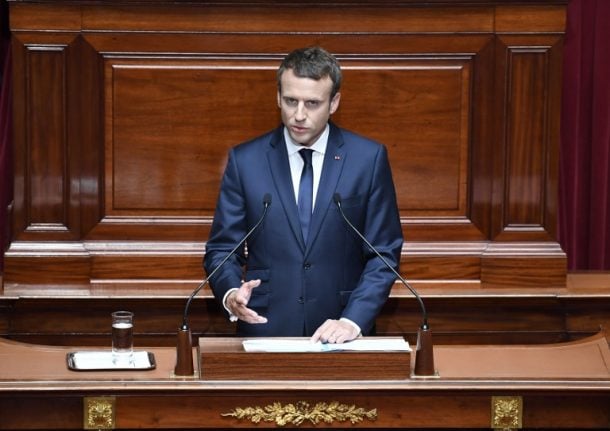 French President Emmanuel Macron said on Monday that the country was ready to embark on a “radically new path” after presidential and parliamentary elections swept him and his new centrist party into power.

“Until now, we were on the wrong track,” Macron said in a solemn address to both houses of parliament gathered at the Palace of Versailles, adding: “We preferred rules to initiative.”

He said the French people had voted for “profound changes” and vowed an end to “half measures and cosmetic arrangements.”

Macron spelled out some of the problems France faced including terrorism, debt, unemployment, low investment and growing poverty but told MPs and Senators that they must meet the hopes of French people.

“The French people have made known their wishes known to us, and we will be their servants. We must live up to this French hope, and what we have to accomplish is a real revolution,” he said..

He also told them the state of emergency, that has been in place since the night of the Paris terror attacks on November 13th 2015, would end in Autumn.

“I will re-establish the freedoms of the French people by lifting the state of emergency this autumn, because these freedoms are the precondition of the existence of a strong democracy,” Macron said. He told parliamentarians he hoped they would in turn back his anti-terror bill to strengthen France's ability to fight jihadists.

Macron also told around 900 MPs and Senators who had gathered at Versailles that he wanted a one-third reduction in the number of lawmakers in both houses of parliament.

Macron said the change — which he proposed while running for president — would have “positive effects on the general quality of parliamentary work”.

The Senate has 348 members, while the lower house National Assembly has 577 and Macron warned them he would call a referendum if they do not agree.

Macron also said he planned to introduce a “dose of proportional representation” for the next parliamentary elections, “so that all tendencies are fairly represented (in parliament)”.

That reform could enable smaller parties like the far-right National Front to gain more MPs to reflect the number of votes they are given nationwide.

He also expressed his desire to boost citizens participation in democracy by revising at the “right to petition” so that the public's views are better taken into account. The president also vowed to reform the country's asylum system which is “overrun”.

Macron also reaffirmed his belief in Europe but said it had “lost its way” over the last decade.

“More than ever we need Europe but it has become weakened by divisions and doubt,” Macron said.

Lawmakers from the two houses are usually called together only in times of national crisis, but Macron convened the session, which he plans to make an annual event, to lay out his vision and priorities two months after his election.

The event had spurred unease over a growing concentration of power in the presidency, with his speech seen as proof of what critics call his “monarchical” drift.

The address in the former seat of kings comes a day before Prime Minister Edouard Philippe delivers the government's traditional policy statement to the newly elected 577-seat National Assembly.

The press and opposition parties have accused 39-year-old Macron of pulling the rug from under his premier's feet, and slammed his refusal to take questions after his address.

A media darling during his campaign, Macron has kept the press at arm's length since his election. His speeches have been carefully choreographed affairs, designed for maximum visual impact, but he also sets aside time during public outings to greet members of the public and pose for selfies.

Jean-Luc Melenchon, the leader of the radical leftist France Unbowed party, which boycotted the speech, accused Macron of “crossing a line with the pharaonic aspect of his presidential monarchy”.

The leader of the small centrist UDI party, Jean-Christophe Lagarde, accused the president of “a PR stunt” and also announced he would to stay away from Versailles.

“The hyper president,” Le Parisien wrote on its front page Sunday, above Macron's official photograph, showing him standing at his desk.

“He decides everything, monopolises the stage, controls the communications,” the paper wrote.