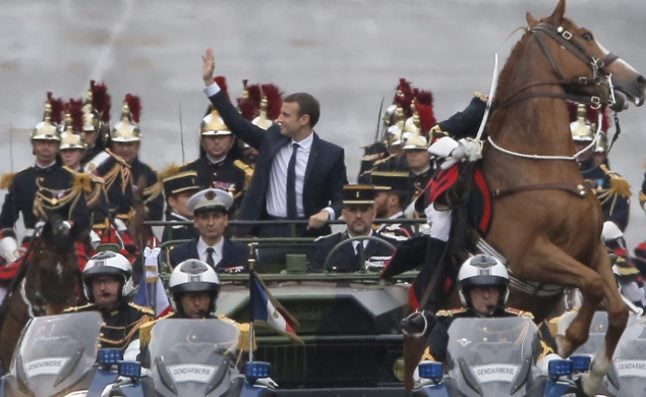 The 23-year-old man from the suburb of Argenteuil near Paris has been arrested charged with terror offences, according to French media RMC, for an alleged plot to assassinate the new president during the annual July 14th parade on the Champs-Elysées.

The reports were later confirmed by police and judicial sources to other media.

According to reports the man, who describes himself as a “nationalist” and follows the ideology of the far right, came to the attention of intelligence services after he was flagged up for a conversation he had online.

According to RMC, he used a chat room linked to an online game to express his desire to get hold of a Kalashnikov to commit an attack.

His words were then reported to a government website that allows members of the public to report suspicious activity.

Three kitchen knives were found in his vehicle and analysis of his computer found that he had conducted internet searches on potential targets, the source said.

He was charged on Saturday with plotting to commit a terrorist act, the judicial source told AFP.

It was under questioning that the man admitted he wanted to carry out a political act by killing the president during the parade on France's national day.

He also admitted to police he wanted to attack “blacks, Arabs, Jews and homosexuals,” RMC stated.

“His plot remains vague but he indicated he wanted to attack minorities. He appeared to have been inspired by previous mass shootings including the Colombine massacre,” a police source told L'Express newspaper.

The individual was described as mentally unstable but “determined” and had already been convicted of glorifying terrorism (apologie du terrorisme) in 2016.

The man was convicted for condoning terrorism in 2016 and sentenced to three years in prison, of which 18 months were suspended.

He had applauded neo-Nazi mass murderer Anders Behring Breivik, who killed 77 people in a bomb and gun rampage in 2011 in Norway.

The top date in France's ceremonial calendar, the July 14 parade commemorates the storming of the Bastille prison in 1789 — the start of the French Revolution and a turning point in world history.

The parade takes place on Paris's Champs-Elysees, which has been the site of two recent attacks targeting police.