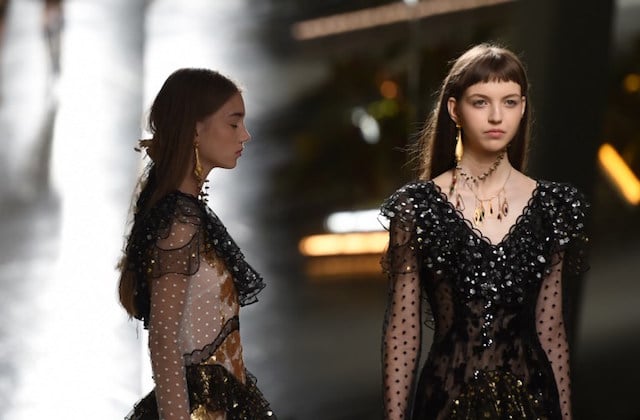 Models display fashions during the Rodarte Spring-Summer 2017 Runway show at New York Fashion Week in September 2016. Photo: Timothy A. Clary/AFP
New York-based Proenza Schouler and Californian house Rodarte — who normally present their collections at New York fashion week — have been invited into the elite haute couture fold, which shows only in Paris.
READ ALSO: Fashion Week brings in €1.2 billion to Paris economy
Their debut as guest members comes as Chanel's veteran maestro Karl Lagerfeld will be given the Grand Vermeil medal, the highest honour the city of Paris can bestow, and a major new exhibition opens about Christian Dior.
The Belgium label A.F. Vandevorst and Holland's Ronald van der Kemp have also been invited to show on the haute couture catwalks for first time alongside French brand Azzaro.
Only 15 fashion houses including Chanel, Christian Dior, Jean Paul Gaultier, Maison Margiela and Giambattista Valli have the right to call their work haute couture.
Their entirely handmade creations, which can cost tens of thousands of euros (dollars) for a single piece, are worn by some of the richest and most powerful women in the world.
READ ALSO: How to dress like a French woman: Five tips to remember (and five to forget)
French haute couture designer Julien Fournie — whose clients include royalty — said he welcomed the inclusion of the American brands, which are best known for dressing Hollywood stars.
“Everyone has the right to come to Paris to measure themselves against the greats. All the better (that) the Americans come and we will see what they can do,” he added.
Karl Lagerfeld honoured
Los Angeles-based Rodarte, run by sisters Kate and Laura Mulleavy, have dressed pop star Katy Perry and made headlines with their 2014 “Star Wars” dresses which carried images of Luke Skywalker and robot R2-D2.
They designed the costumes for the ballet movie “Black Swan”, and its star Natalie Portman wore one of their gowns to pick up her Oscar for best actress in 2011.
Her husband French choreographer Benjamin Millepied has worked with the sisters on a number of his ballet productions.
Proenza Schouler designers Lazaro Hernandez and Jack McCollough will show their spring summer ready to wear line they would have shown in New York in September, allowing them to deliver it to shops two months ahead of the competition.
The haute couture shows will also see newly appointed French designer Maxime Simoens take his first bow at Azzaro, which was founded half a century ago by the Italian Loris Azzaro.
READ ALSO: France cracks down on super-skinny models
But the big set-piece events of the week will as ever be the often spectacular Dior and Chanel shows.
Maria Grazia Chiuri will present her second couture collection for Dior on Monday which will be followed by the opening of a new exhibition dedicated to the house's founder Christian Dior at the city's museum of decorative arts.
The show, “Christian Dior: Designer of Dreams”, which will run until January 2018, traces the history of the brand from Dior's invention of the “New Look” after World War II right up to Chiuri, who became its first female artistic director last July.
And 83-year-old Lagerfeld, known as the “kaiser” for his mastery of the fashion world, will be presented with the Grand Vermeil medal on Tuesday after Chanel's show at the Grand Palais by the mayor of the French capital, Anne Hidalgo.
Url copied to clipboard!