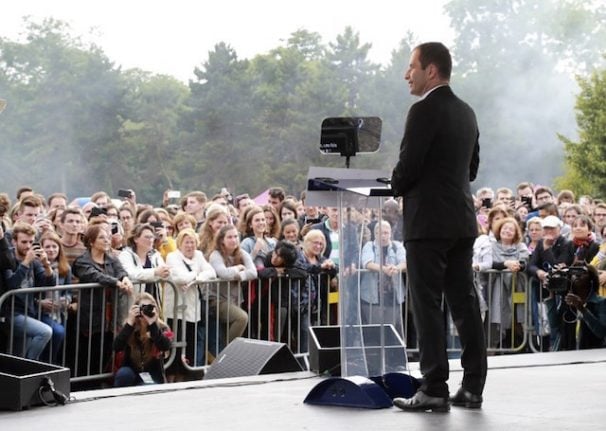 Benoit Hamon delivers a speech during a rally for the launch of his "First of July movement." Photo: Jacques Demarthon/AFP
“Today I have decided to quit the Socialist Party. I am leaving the party but I am not giving up on the socialist ideal,” said the 50-year-old as he launched his new movement before a 11,000-strong crowd in Paris.
READ ALSO: Benoit Hamon – the 'French Jeremy Corbyn' – goes from underdog to Socialist runner
“The Socialist Party has perhaps had its time… My belief is that it is time to turn the page,” said Hamon who was the surprise winner of the Socialist nomination for president but who crashed in the first round of the vote in May.
Scoring just 6.2 percent, he finished a humiliating fifth as voters abandoned the former ruling party which has been crippled by deep ideological divisions.
Hamon's announcement came just days after former premier Manuel Valls said he was quitting the Socialist Party to be allied with President Emmanuel Macron's centrist Republic on the Move (REM).
Url copied to clipboard!