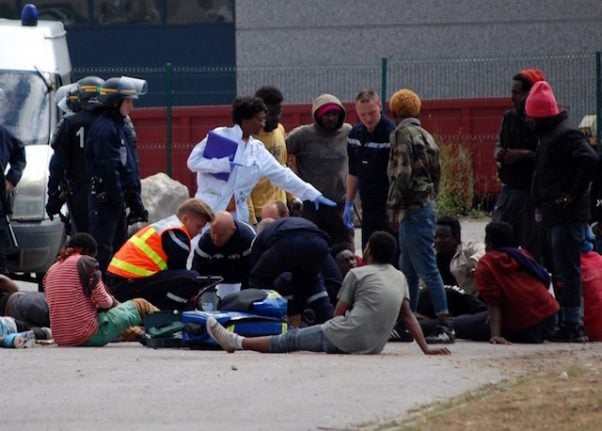 Police officers and emergency workers intervene as injured migrants lay on the ground after clashes between Eritreans and Ethiopians in Calais. Photo: Bernard Barron/AFP
The fighting pitting Eritreans against Ethiopians left 16 migrants injured and around 10 have been arrested, police official Etienne Desplanques told AFP.
READ ALSO: France vows 'no new refugee centre in Calais' as migrants say conditions are worse than ever
“In all, there are 16 migrants hospitalised, 15 for minor injuries and one with a more serious head injury,” Desplanques said.
Riot police had been deployed to separate the fighting between Eritreans and Ethiopians in an industrial zone of Calais, and the situation was brought under control by mid-afternoon, he said.
The port city of Calais has for years been a magnet for migrants and refugees hoping to cross the Channel to Britain and last year France broke up the camp known as “the Jungle” transferring thousands of migrants to centres around the country.
But there are currently believed to be between 400 and 600 migrants in the Calais area.
IN PICTURES: The life of migrants in Calais
Violence also broke out Friday night between Eritreans and Ethiopians while meals were being distributed by charity groups, lightly wounding nine people, Desplanques said.
Security forces used tear gas to break up Friday's brawls, according to deputy mayor of Calais Philippe Mignonet.
“In the past 12 hours, in terms of violence, there's been an escalation,” Mignonet told AFP.