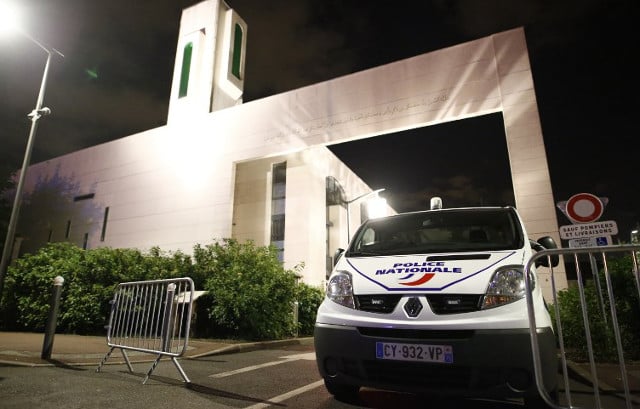 Photo: AFP
The 4X4 vehicle “struck pillars and barriers in place to protect the mosque of Creteil”, in the southeast of the capital, before speeding off and crashing into a traffic island, police said. No-one was injured.
The driver, who was also the owner of the vehicle, fled but was arrested “without incident” at his home shortly afterwards, police added.
A search was conducted Thursday night at the driver's home, a source close to the investigation said, adding that the suspect had made “confused remarks in relation” to a string of jihadist attacks that have struck France, killing 239 people since 2015.
The man is a 43-year-old Armenian who will be subject to psychiatric tests, another source close to the investigation said.
According to judicial authorities, he was not under the influence of alcohol.
French Interior Minister Gerard Collomb said in a statement that his “exact motives” will be determined by an investigation.
Paris police prefect Michel Delpuech said he was “doing everything possible… to clarify the motives of the driver and determine if he is criminally responsible”.
In a statement, the rector of the Grand Mosque of Paris, Dalil Boubakeur, described the incident as a “criminal attack” and an “Islamophobic act”.
“What has just happened in Creteil seems to justify the fears I expressed after the attack close to Finsbury Park Mosque in London,” the head of the National Observatory Against Islamophobia, Abdallah Zekri, told AFP.
He called for “more vigilance on the part of mosque officials”, and called on the authorities to “strengthen protection of places of worship”.
On June 19, a man driving a van mowed down worshippers leaving the Finsbury Park Mosque in north London.
The family of Darren Osborne, the man suspected of deliberately driving into the Muslim group, said he was “troubled”, while regulars at his local pub said he was thrown out for threatening to kill Muslims.