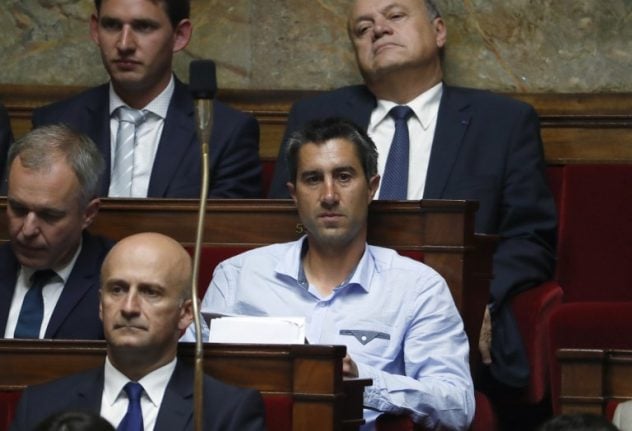 Leftist French MP François Ruffin in the French parliament without a tie! Photo: AFP
French far-left MPs caused a stir among their colleagues in parliament for choosing not to wear a tie at the first meeting of the new French parliament on Tuesday.
Jean Luc Mélénchon's France Insoumise (LFI) party sparked the row after male MPs turned up to the National Assembly's inaugural session without wearing ties.
And although it isn't obligatory for French MPs to wear a tie at the Palais Bourbon, they are considered a traditional part of the “uniform” for men.
France Insoumise MPs vehemently defended their right not to conform with Mélénchon himself comparing his MPs to the working class French Revolutionaries who were known as the “Sans Culottes”, which translates as “without trousers”.
“We've had the Sans Culottes, now we have the Sans Cravates (without ties),” joked Mélénchon. Photo: AFP
But members of other parties in the Assembly were not amused.
A spokesperson for President Emmanuel Macron's La Republique en Marche (REM) party called the move an “insult”.
“Arguing that, 'we're here to represent the French working class so we're not going to wear ties', I think that it's an insult to those people,” said the spokesperson.
Conservative Bernard Accoyer, an ex-president of the French parliament, has weighed in, saying that it represents “a lack of respect for the French people, the voters, democracy and the institution which is at the heart of the Republic.” La France Insoumise leftist party's Francois Ruffin speaks to the press outside parliament. Photo: AFP
Leader of the far-right National Front party Marine Le Pen mocked the move, saying, “These people think they're Jean Moulin because they're not wearing ties,” referring to the hero of the French Resistance during World War II.
Even though it's not actually against the rules not to wear a tie – with French MPs simply asked to “dress properly” – guards at the French parliament often offer a backup tie to those who turn up without one.
Despite the uproar, there have been some far more dramatic cases of flouting the MPs' tradition of wearing a tie.
In 1985, Jack Lang, then minister for culture, sat in the French parliament wearing a Mao costume and in 1997, another MP arrived in workers overalls.