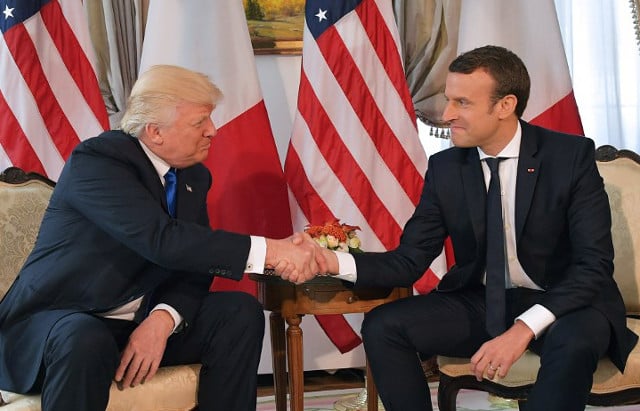 Photo: AFP
Macron, who has made clear his differences with Trump notably on climate change, invited Trump and his wife Melania to attend the July 14 parade in Paris.
This year, the event will mark “the 100th anniversary of the US joining the war with French troops in World War I,” an official in Macron's office said.
On July 14 last year, a radicalised Tunisian man killed 86 people as he rammed a truck through a crowd watching Bastille Day fireworks in the French Riviera city of Nice.
A Trump trip to Paris would follow a visit to France by Vladimir Putin in May when Macron hosted the Russian leader at Versailles palace.
READ ALSO: The 39-year-old Macron made his mark on the international stage when he gave Trump a white-knuckle handshake at a NATO summit on May 25.
He later mocked Trump's decision to pull the United States out of the 2015 Paris Agreement to combat climate change.
Macron's English-language appeal to “make our planet great again” — a riff on Trump's own slogan of making America great again — became a social media hit.
'Joint Response' if called for in Syria
The two leaders also agreed to the need for a “joint response” in the event of another chemical attack in Syria on Tuesday, the French presidency said.
Their call came a day after Washington said that Syrian President Bashar al-Assad may be preparing another chemical weapons attack and warned that his regime would pay a “heavy price” if it went ahead with such an assault.
A Pentagon spokesman said US intelligence had noticed suspect activity at the launch site of the regime's apparent chemical strike in April.
Days after that strike on a rebel-held town, the United States launched a cruise missile strike on the airfield in retaliation — the first direct US attack on the Syrian regime.
The French foreign ministry refused to say Tuesday whether it too had information about possible preparations by the Syrian regime for a chemical attack.
After a meeting last month with Russian President Vladimir Putin, an Assad ally, Macron drew a “very clear red line” on the use of chemical weapons “by whomever” and warned of reprisals.
In August 2013, a chemical attack near Damascus brought France and the US to the brink of a joint military intervention in Syria.
But then US president Barack Obama, who had also declared that a chemical attack would cross a “red line”, eventually decided against military action.
The US and Russia instead struck a deal on the destruction of Syria's chemical weapons stockpile.