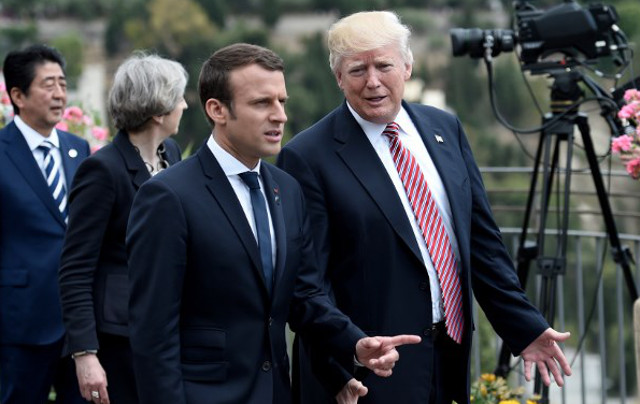 Photo: AFP
US president Donald Trump has accepted French president Emmanuel Macron's invitation to visit France for the Bastille Day parade.
Macron, who has made clear his differences with Trump notably on climate change, had invited Trump and his wife Melania to attend the July 14th  parade in Paris on Tuesday.
This year, the event will mark “the 100th anniversary of the US joining the war with French troops in World War I,” an official in Macron's office said.
Trump will attend the traditional military parade on the Champs-Elysees avenue, where US soldiers will march alongside French troops to commemorate the centenary of America entering World War I, Macron's office said.

On July 14 last year, a radicalised Tunisian man killed 86 people as he rammed a truck through a crowd watching Bastille Day fireworks in the French Riviera city of Nice.
A Trump trip to Paris will follow a visit to France by Vladimir Putin in May when Macron hosted the Russian leader at Versailles palace.
Relations between Trump and Macron have been somewhat fraught.
The 39-year-old Macron made his mark on the international stage when he gave Trump a white-knuckle handshake at a NATO summit on May 25.
He later mocked Trump's decision to pull the United States out of the 2015 Paris Agreement to combat climate change.
Macron's English-language appeal to “make our planet great again” — a riff on Trump's own slogan of making America great again — became a social media hit.