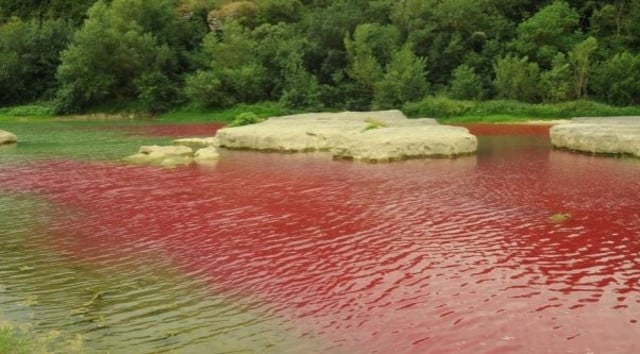 Anyone crossing over the Gardon, which runs through the Gard department in southern France, would have been forgiven for getting a little worried given the colour of the river on Monday.

Images revealed how the waters of the river, that is popular with kayakers and fisherman had turned blood red.

However there was no reason to panic at the scene that could have belonged in a science fiction, or indeed a horror, movie.

The red water was due to colouring that had been placed in the river by scientists who were carrying out an experiment to test the levels of karst – the rock type along the river that is ready dissolved by the water.

The scientists from SMAGES, the organisation which keeps a check on the river’s water, say there is absolutely nothing toxic in the 15kg of powder that were thrown into the river.

The experiment did offer some spectacular if scary images that were posted on Twitter.

Scientists have warned that next month a similar experiment will be carried out that will see the river turn green, but again fishermen, kayakers and swimmers have nothing to worry about.

In April last year The Local reported how several rivers in France had turned fluorescent green.

Rivers in at least 12 départements around the country have all fallen to the same mysterious fate.

The move, however, wasn’t some kind of pollution – it's the work of environmental workers in a bid to raise awareness about a lack of funding in their sector.