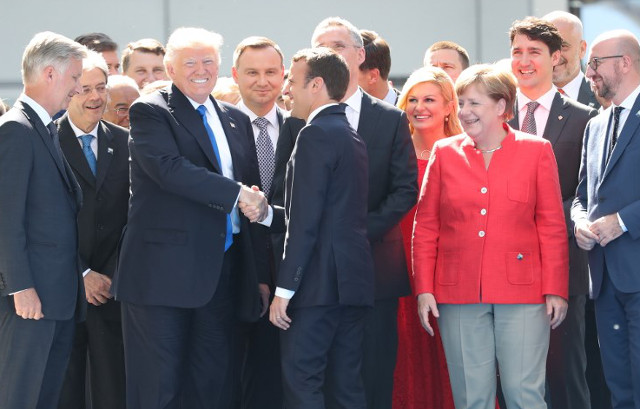 Photo: AFP
French people are far less favourable towards the US than they were in the past and its largely down to the massive loss of confidence in the US president since Donald Trump took office.
Today in France, favorability towards the US is at 46 percent, a significant fall since Obama's presidency when levels of favorability remained fairly stable at around 73-75 percent.
The drop is mainly down to French views of Donald Trump.
French confidence towards the US president has sharply declined since Donald Trump came into power, according to respected American think-tank Pew Research Centre.
Confidence has dropped to the lowest levels since the George W Bush presidency, with just 14 percent of French people saying they have confidence in the US president.
Back in 2008 only 13 percent of French people said they had confidence in Trump's predecessor Bush.

Graph:  Pew Research Centre
This is in stark contrast to the days of his predecessor, US president Barack Obama, when levels of French confidence in the presidency remained consistently high, at well above 75 percent.
In the past year in France, public confidence has dropped from 84 percent in Obama's last year to the current level of 14 percent.
There are valid reasons why the French might not have faith in Trump, not least because he has engaged in a fair amount of French-bashing in recent months and angered many politicians on this side of the Pond.
Trump provoked anger several times in France by suggesting the string of terror attacks the country has suffered was the “country's own fault”, as well as bemoaning the fact that “France was no longer France”.
Trump's criticism of Paris and France's immigration policies prompted anger by the city's mayor Anne Hidalgo, who called Trump “unfriendly” and the then President Francois Hollande, who hit back saying: “It is never good to show the slightest mistrust towards a friendly country.”
One Frenchwoman's response to a Trump tweet about a terror attack in Paris showed the level of anger in France over some statements made by the US president. Her Facebook post went viral in the US, in part because she accused the US president of “arseholery”.
“Thanks for all your concern but don't use France as an excuse for your arseholery,” she said. Apart from those barbs by Trump many French were also likely to have been unimpressed by the fact he appeared to back the far-right candidate Marine Le Pen in the presidential election.
Trump's decision to pull the United States out of the Paris climate deal also did not go down well in France.
Surveys also showed that since Trump was elected president of the United States in November last year, the numbers of French citizens visiting the US has dropped notably.
Since the 8th of November, when Trump won the presidential election, flight searches from France to the US decreased by 14 percent versus the same period last year.
The loss of confidence in Trump has contributed to a steep drop in favourability towards the US among the French.
Today in France, favorability towards the US is at 46 percent, a significant fall since Obama's presidency when levels of favorability remained fairly stable at around 73-75 percent.
The French are only slightly more positive towards Trump than the Germans, where 11 percent of people have confidence in the US presidency, while during Obama's terms those levels reached highs of 93 percent.
In Germany, favorability towards the US today is at 35 percent, down from 57 percent when he became president. During Obama's presidency, US favorability among Germans fluctuated between 50 and 64 percent.
READ ALSO: Of the three, the UK has the highest confidence in the current US president but it's still a paltry 22 percent. Trump recently cancelled a visit to the UK that was due to be marked by huge street protests.
And in the UK, favorability towards the US is at 50 percent compared to 65 percent in 2015, towards the end of Obama's presidency.
Among almost all of the US’s major allies across the globe, including Canada, public confidence has been severely damaged since the unpredictable property tycoon came to power.
But Trump certainly isn't unpopular everywhere, with the research showing that in Israel and Russia people have more confidence in him than his predecessor.
This year, 53 percent of Russians have at least some confidence in the US president, up from an Obama-era low of 11 percent in 2015, while in Israel, 56 percent are confident in president Trump, up from 49 percent confidence for Obama in 2015.
READ ALSO: Macron's trolling of Trump wins fans in both France and the US