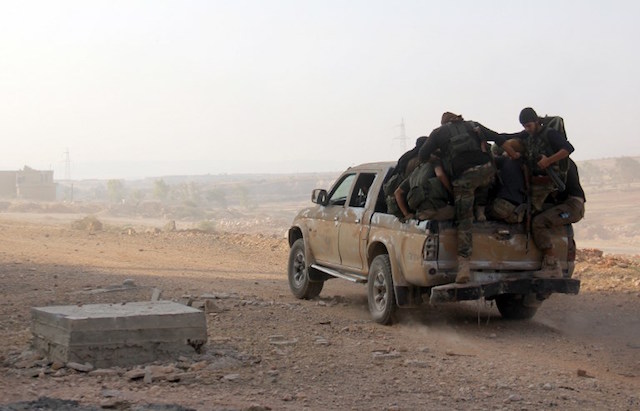 Fighters from the former Al-Nusra Front in Syria. File photo: Omar Haj Kadour/AFP
The men, all in their 20s, were found guilty of associating with a terrorist organisation. They had been recruited by Omar Diaby, a French national of Senegalese descent known for funnelling fighters to Syria.
The stiffest penalties went to Ali Abzouzi and Luck Manodritta, sentenced to six and eight years in prison, respectively. The two had spent several months in Syria in 2013 and 2014.
READ ALSO: French women returning from Syria ‘a danger'
Two others, Cedric Belly and David Assila, were given four years in prison including two-year suspended sentences for having attempted to join the others.
The court also handed a three-year jail sentence to Magomed Bagaiev, including a one-year suspended sentence for helping a young woman prepare to leave for Syria.
The court however acquitted Rouslan Bagaiev, who had also been accused of helping the woman.
The trial highlighted the extent of Diaby's influenced on the young men, most of them just becoming adults at the time of their recruitment in 2013 and 2014.
READ ALSO: France says Russia can't stop lying about Syria
Throughout the trial, which started Monday, the defendants described Diaby, who was known to recruit in the Nice area, as an elder who imposed his ideas on younger people through his preachings, brainwashing them.
Investigators said Diaby, who has also called himself Omar Omsen, had set up a particularly well-organised recruiting network.
The United States last year labelled Diaby a “global terrorist” subject to US economic sanctions and estimated he has recruited around 50 French fighters to head to Syria.
Diaby had been thought to be dead but last year he surfaced, giving an interview by Skype to France 2 television.