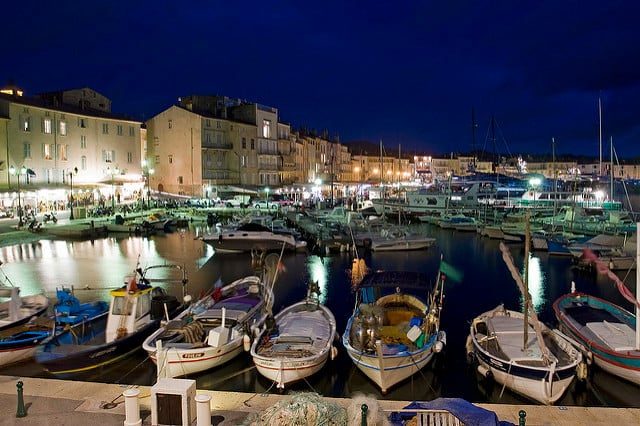 Photo: Alessandro Prada/FLickr
A 22-year-old British surfing champion, named Jack Jones was left disfigured after being beaten up in resort town on the Mediterranean coast in the early hours of last Sunday morning.
The young man, whose family own a property in the resort, was so brutally assaulted that he suffered memory loss after being knocked unconscious and was left with a badly swollen and bruised head.
The picture of the surfer's face was featured in many French news sites this week as the attack called into question security in the popular French Riviera beach town.

“I saw the attacker jumping on his head,” Laurent, a witness told Nice Matin newspaper. “He was kicked at least 15 times while he was on the floor.”
The witness was leaving a club at 3.30am in Saint Tropez's Place des Lices when he saw three men attack the young British man who was out with his cousin.
“Three attackers arrived on foot and threw themselves at them for no apparent reason,” the witness said. Laurent said the beating lasted around five minutes before the attackers fled on foot.
Huw Jones, the victim's father told Var Matin that they considered the assault to be “attempted murder”.
“Jack had spent a quiet evening in the port of Saint-Tropez with us, his aunt, his grandmother and his cousins,” he said.
He left his family along with a cousin to have a drink with some French people he had met. (AFP)
But on the way home they were set upon.
“Two of the men pushed Tom (his cousin) and then one punched Jack unconscious before he even realized he was being attacked.
“Then they started to knock and jump on Jack's head. He was unconscious!”
Apart from the obvious facial injuries seen in the picture above, the 22-year-old Jones, whose family is from from Wales, was left needing stitches and lost his memory for 24 hours.
“He was taken to hospital and we had to wait 12 hours fearing for his life or that he had suffered brain damage,” said Huw Jones. “We did not know if there would be any permanent impact.”
Another member of his family said: “The attack was totally gratuitous. The fact he survived is a miracle.” (AFP)
The beating is bad news for the resort that is known as a hideaway for the rich and famous. During the summer season footballers, film stars and singers can be seen on the beaches and in the bars of the town.
It is not the first time an attack of this nature has happened in Saint-Tropez.
French media LCI notes that in 2015 two separate incidents saw a shop keeper and a hair dresser both badly beaten up to the point where they lost consciousness.
The family, witnesses and French media are asking questions about security in the resort. “We are all shocked that an event like this can happen in a city like Saint-Tropez.
“We are shocked that there are no police on the Places des Lices square at this time of night, especially as it is well known for these kind of attacks. Has nothing been done to reduce the dangers?” (AFP)
Laurent who witnessed the attack said tourists would be turned off the resort town unless something was done.
“We can see that there are bad people hanging around,” he said.
“We need a sense of security, because if it goes on, there will be no tourists left in Saint-Tropez.”
The Local has contacted both the Saint Tropez townhall and local police for comment.