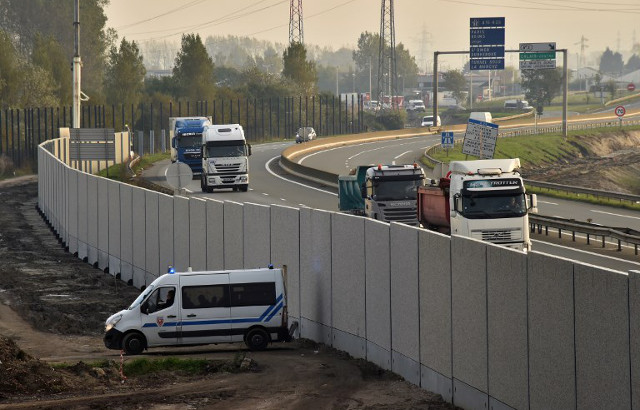 Poland on Wednesday urged France to guarantee security for its lorry drivers after one died in a crash caused by roadblock erected by migrants near the northern port of Calais, a jumping off point to reach Britain.

Polish Interior Minister Mariusz Blaszczak confirmed that the driver, who crashed early Tuesday, was a Pole and requested French counterpart Gerard Collomb “take actions to guarantee the security of Polish lorry drivers in the Calais region.”

The driver died after slamming into a truck stopped by a log roadblock which migrants had erected across the motorway at Guemps, on Calais's eastern outskirts, police said.

Blaszczak told Collomb in a letter the incident had caused “deep concern” in Poland. Polish drivers account for a quarter of those plying long-distance European routes.

“It is unacceptable that illegal acts lead to a situation where innocent people die,” added Blaszczak, who offered Polish help to “improve security in the Calais region.”

Tuesday's death was the first for a driver since the migrant crisis at France's Channel ports began in 2014, although there have been numerous fatalities among migrants seeking to hitch a ride to Britain by train and truck.

A police source said nine migrants were detained: six Eritreans and an Ethiopian, all minors, and two Afghan men found in one of the trucks.

They could face charges of manslaughter, impeding traffic and endangering the lives of others. Local prosecutor Patrick Leleu told AFP said those detained denied erecting the roadblock.

Five of the minors are aged under 16, meaning they cannot be locked up, he added.

The squalid “Jungle” settlement was home to up to 10,000 at its height. Between 400 and 600 migrants are today thought to be living in the Calais area in precarious conditions in the hope of reaching Britain.