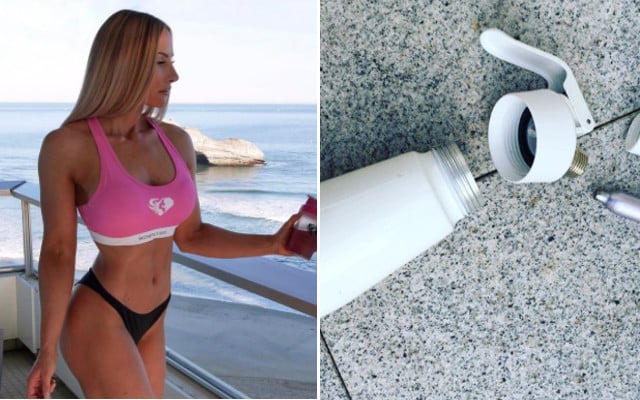 Photo: Rebecca Burger/Instagram
Rebecca Burger, who had a large following on the social media site, where she posted regular pictures of herself promoting fitness products, was killed in eastern France in what the family said was a domestic incident. “It is with great sadness we announce the death of Rebecca who died the June 18th, 2017 in an accident in the home,” read a statement on Burger's Instagram account, signed “The grieving family”.
The post was followed by hundreds of comments from her shocked and saddened followers.
“This is completely unfair, crazy and I have no words. I am sorry for your loss,” wrote one fan.

Another post included a photograph of a dispenser made by the brand Ard'Time, which has a small pressurised cannister, alongside a warning not to use similar devices.
“Here is an example of a whipped cream canister that exploded and struck Rebecca's chest, resulting in her death,” the post read.
“Do not use this kind of utensil in your home! Tens of thousands of defective devices are still in circulation.”
The dispenser in the image is not actually the one that exploded which was taken away by police.
According to reports in France the victim's brother has announced that the family will sue the company that made the dispenser.

A police source confirmed the death to AFP. Officers have opened an investigation.
READ ALSO:

Her death comes after after two similar accidents in France in 2014. Neither resulted in death.
France's National Consumer Institute (INC) had already issued a warning over the same type of cannister, used by the Ard'Time brand, saying the plastic lid may not be able to withstand pressure from carbon dioxide inside.
In 2014 The Local reported how at least 15 brands of dispensers sitting in thousands of French kitchens had the same defect and a consumer watchdog group called for the government to mount a full-scale public education campaign on the dangers of the devices.

When a user screws a new gas cartridge into the head of one of the defective canisters the resulting pressure causes the spray nozzle to break free and fire off like a rubber bullet, French consumer watchdog group 60 Millions de Consommateurs said at the time.
Whipped cream making casualties aren’t that rare in France. The watchdog group said the whipped cream propelled missiles have cut users necks and hands, prompted serious injuries to faces and throats.
In June 2013 a woman in Corsica even lost an eye when her dispenser exploded, French daily Le Parisien reported. Then last October an older woman, trying to make a dessert for her grandson, was wounded when her whip cream maker ran amok.
“There was a huge explosion. I fell to the ground. I broke six ribs and my sternum,” she told RTL radio. “At the hospital they told me that if the shock and the blast had been directed at my heart, I’d be dead now.”
Reacting to the blogger's death Ard'Time released a statement saying: “Ard'Time is aware of this accident and unfortunately can only deplore it, although at this stage there is nothing to establish a link between this accident and our brand,” said the company.
“We cannot let it be said that we have done nothing since February 2013, the date of the first incident involving an Ard'Time siphon,” the company said in a statement to L'Express newspaper.