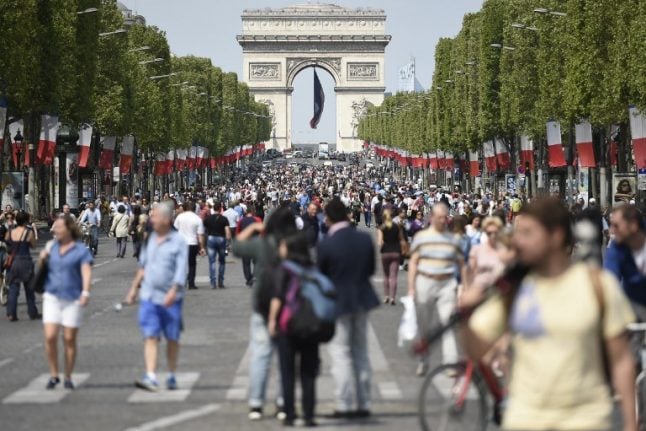 The car-free day will take place on October 1st, but unlike previous “car-free” days in Paris this one will mean what it says.

From 11am to 6pm cars, motorcycles and mopeds will not be allowed to travel around in the centre. Cyclists, roller bladers and non-motorized scooters will be allowed in Paris. And pedestrians too of course.

However you'll still need to keep an eye out whilst crossing the road.

That's because taxis, emergency service and delivery vehicles, RATP public transport vehicles and “artisans” who can prove they are working” will be allowed to take to the roads.

Although they will not be allowed to break a 30km/h speed limit.

But let's not complain, the 2017 car-free day has been vastly extended from previous years when it was held.

In 2015, only the very heart of Paris went car-free. Last year the area was extended to stretch from the Champs-Elysées in the west to Père-Lachaise cemetery in the east and from the Sacre-Coeur in the north to Montparnasse tower in the south.

Christophe Najdovski, the Deputy Mayor in charge of transport, told Le Parisien newspaper: “Only the Peripherique ring road and the main routes around the Bois de Boulogne and the Bois de Vincennes will remain open to traffic.”

“The idea, it is to show that you can live in the city without having a car,” said Najdovski. He said people would be able to come to Paris by car either before 11 or be forced to park on the city's limits and take public transport into the city.

“This third edition, will not only benefit Parisians but also the inhabitants of Ile-de-France, and tourists. It will be a first in the history of the capital and will allow everyone to rediscover a quieter and less polluted city,” said Najdovski. Paris Mayor Anne Hidalgo has long declared war on cars in a bid to battle pollution. As well as holding annual car free days she has also taken the controversial measure of pedestrianizing part of the highway along the right bank of the river Seine.

She has also banned the most polluting cars from the streets of Paris, and the plan is to ban all diesel cars from the city’s roads by 2025.

On the last car-free day, the 25th September 2016 the Airparif association, which measures air quality, said nitrogen dioxide had reduced on average by 20 to 35%.

Hidalgo said the first car-free day, on 27th September 2015, was an “indisputable success” which “involved citizens, reduced emissions and noise pollution, and roused the spirit of Parisians and tourists.”