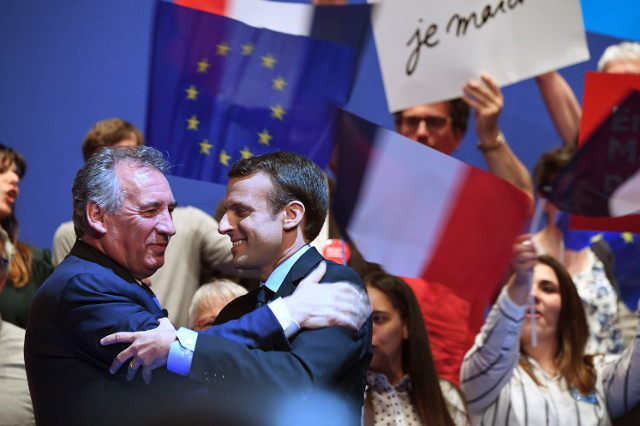 Photo: AFP
The move means Macron loses a crucial centrist partner as he seeks to pull together a government to push forward his ambitious pro-business reform agenda.
Bayrou's small centrist MoDem party was in an alliance with Macron's 14-month-old Republic on the Move (REM) movement, and Bayrou was one of three MoDem ministers in the cabinet.
Another MoDem minister, former defence minister Sylvie Goulard, announced her resignation on Tuesday and on Wednesday Marielle de Sarnez, the minister of European affairs joined Bayrou in also announcing she would quit the government.
That means there are no more MoDem ministers left in Macron's fledgling government. Another of Macron's allies Richard Ferrand had already left his post as minister of territorial cohesion.
The president hopes later Wednesday to complete a partial reshuffle of his month-old government following parliamentary elections that handed him and his MoDem allies a commanding majority.
“I have taken a decision not to be part of the next government,” Bayrou said, adding that he would hold a press conference at 5pm.
READ ALSO: Photo: AFP
MoDem is facing allegations it used European parliamentary funds to pay assistants actually based in France.
Bayrou was a key backer of Macron's movement during the presidential campaign, and his support was crucial in winning centrist votes for the new president.
When Bayrou threw his weight behind Macron's fledging movement, the future president hailed it as a “turning point” in his campaign.
MoDem won 42 seats in the parliamentary election while Macron's party crushed its rivals by winning 308 seats, giving their centrist alliance a solid majority in the 577-seat National Assembly.
Government spokesman Christophe Castaner said Bayrou's move was a “personal choice” which “simplifies the situation.”
“He wanted to defend himself in this affair,” Castaner told French radio station Europe 1.
Bayrou has dismissed the allegations, saying there had “never been” fake jobs among his party's European Parliament staff.
Paris prosecutors opened a preliminary investigation this month into claims in the Canard Enchaine newspaper that MoDem was using European parliamentary funds to pay assistants who were actually based in France.
Earlier this month, Bayrou himself announced plans to ban lawmakers from hiring family members, one of a raft of measures aimed at cleaning up politics after a slew of scandals.
He said at the time that the government aimed to restore confidence in politicians, which was severely rattled by revelations over the alleged fake parliamentary job that conservative MP Francois Fillon gave his wife.
Bayrou ran three times for president, winning more than 18 percent of the vote in the 2007 election.