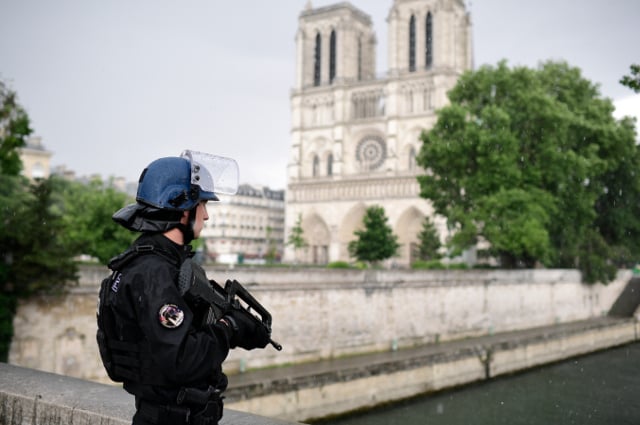 Photo: AFP
France's Interior Minister Gerard Collomb, the man tasked with the crucial job of creating new measures to combat terrorism in France, will be presenting his proposal to the government on Thursday.
The unveiling of the new proposals comes just days after after an attempted terror attack on the Champs-Elysees in Paris by an armed man who crashed his car into a police van.
President Emmanuel Macron wants to once again extend the state of emergency that has been in place since the Paris attacks of November 2015 and has been heavily criticized by rights groups.
It is due to end on July 15th but Macron wants parliament to extend it until November this year after which it will be replaced by the new measures announced by his Interior Minister.
Collomb revealed the outline of the measures in an interview published by Le Figaro on Tuesday, saying that the project must rise to the challenge of observing “a true balance between necessary security for our citizens and the protection of individual liberties.” French Minister of the Interior Gerard Collomb addresses the media near the site of an attack at the entrance of Notre-Dame cathedral in Paris on June 6, 2017. Photo: AFP
Here's what the government plans to do:
1. Establish cordons around protected areas
Terrorists have targeted concerts, sporting events and national events in France at the Bataclan, the Stade de France and at the Bastille Day fireworks celebration in Nice. To fight against this, the government wants to allow police to establish areas of protection around places judged to be at risk of a terrorist act. Whether these perimeters will be temporary or permanent is unclear.
For the Euro 2016 tournament authorities built a huge fence around the Stade de France.
“For example, the starting points of the Tour de France, or big festivals, the police chief will allow a very visible security presence and baggage inspection,” Collomb told Le Figaro.
Vehicles present around these events will also be susceptible to searches by security forces. If the driver refuses to comply, he will obliged to leave the area.
READ ALSO: The scene after France's most recent attempted terror attack on the Champs-Elysees. Photo: AFP
2. The power to close places of worship
Several mosques in France have been found to be spreading radical ideology and jihadism and many have been closed since the state of emergency was first introduced, including the “Rahma” mosque in the greater Paris region of the Ile-de-France.
If the new measures go ahead as planned, local authorities rather than the Interior Ministry will be able to take the decision to shut mosques where followers are being encouraged to commit acts of terrorism.
“Authorities will be able to decide whether to close places of worship from the moment that they are found to inciting terrorism,” the Interior Minister said.
Computers and phones can also be confiscated.
3. House arrest to be replaced by surveillance of individuals
The Interior Minister said in the interview that he plans to replace house arrest with the surveillance of individuals in new measures that will only be employed to fight terrorism.
“House arrest will be replaced, notably by an obligation not to move beyond a set geographical area, allowing the person to maintain their professional and family life,” he said.
“The area cannot be smaller than the town. Equally, there exists the possibility, for these people, with their agreement, to wear electronic tags,” the Interior Minister continued.
4. Police raids
The Interior Minister also addressed the role of police raids in the country's fight against terrorism.
“The measures foresee the possibility of authorities ordering visits that will be systematically subject to the authorisation of a judicial judge – the Paris judge of liberties and detention who will alone be in charge of these requests,” he said.
These “visits” will only be possible in the name of “preventing acts of terrorism” and if the individual concerned represents “a particularly serious threat to security and public order.”
“Where cases require it, the authorisation to use seized documents will be under the control of the same judge, with the possibility of an appeal,” he added.
The measures are a response to a string of terrorist attacks in France that have included the targeting of soldiers and police officers on patrol at popular tourist spots in Paris, like Notre-Dame, the Louvre, Orly airport, as well as two incidences on the Champs-Elysees.
So far, France's anti-terrorism measures haven't been well-received by everyone. In its attempt to crackdown on incidents of terrorism, the French government was recently blasted by international human rights group Amnesty International who have said that the current measures are being used to curb legitimate protests.