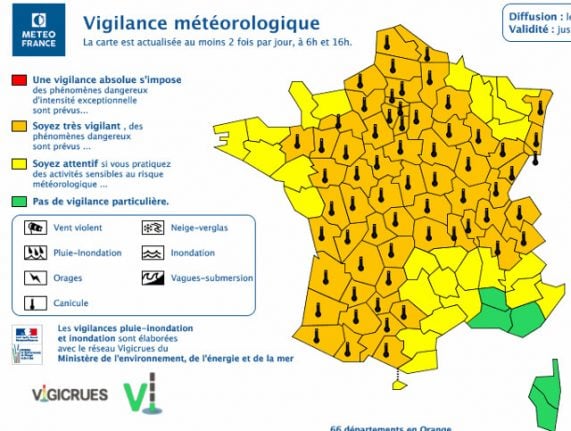 Map: Meteo France
Most of France is sizzling under scorching temperatures with 66 departments now on heatwave alert, including the entire greater Paris region of Ile-de-France, national weather agency Meteo France said.
The weather agency extended the orange alert from 16 departments to 66 on Tuesday, meaning the sweltering temperatures are now affecting vast swathes of France.
The mercury is predicted to rise to nearly 40C in the west of the country with temperatures in the southwestern seaside town of Biarritz expected to reach a whopping 38C.
In Paris and the areas immediately outside it, people will be roasting under temperatures of 36C, while people in the town of Dax in southwestern France will see temperatures of 37C and in Bordeaux and Nantes the mercury will also reach 36C.
Paris has been forced to trigger its emergency heatwave action plan.
READ ALSO: Map: Meteo France
Samu emergency medical teams reported a 15-20% rise in call-outs on Monday and people have been cautioned to take care in the extreme temperatures.
With many people struggling through the heatwave at work, all employers are legally obliged to look after their staff's well-being, that means providing fans if necessary and undertake other measures to ensure the working environment is cool enough. Needless to say they need to ensure there is a supply of cold water.
More generally, drinking water, staying inside and placing a wet or damp towel on your head and shoulders are recommended.
The heatwave is expected to peak on Wednesday and Thursday but for those who've had enough of the hot weather, it looks like there will be some relief at the weekend when temperatures are predicted to dip. The warnings come soon after meteorologists at Météo France predicted that the month of June could be one of the top three hottest on record.