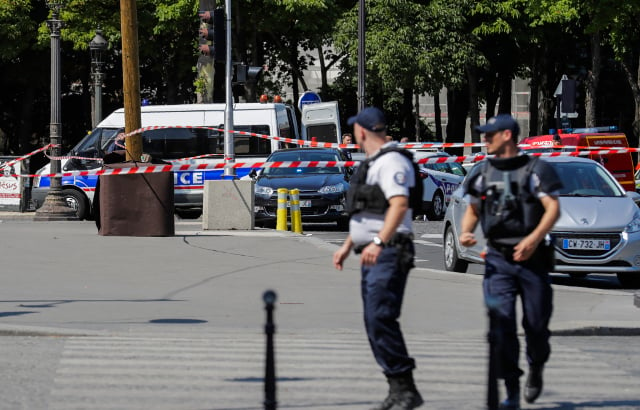 Photo: AFP
Sources close to the probe said the man, named as Adam Djaziri in the French press had been on France's security watchlist since 2015 over ties to “the radical Islamist movement”.
But the suspect's father told AFP that his son “had a registered weapon, he practised shooting”. A source close to the case said the 31-year-old had a firearms permit.
The fact he had an arms permit despite being on the terror watchlist has shocked many in France including the country's prime minister Edouard Philippe, who suggested he's only just found out such a situation could arise.
“No one can be satisfied that someone who has been officially flagged up can benefit from this authorization (to carry arms). Certainly not me,” Edouard Philippe told BFM TV.
On Tuesday investigators found a stash of weapons at Djaziri's home. He had at least nine weapons, including two pistols and a Kalashnikov-type assault rifle, the source told AFP.
There has been no claim of responsibility for the assault, which occurred just a short distance from where a jihadist shot dead a police officer two months earlier.
The man died after ramming a car into a police van on the prestigious avenue. Police sources told AFP that a Kalashnikov assault rifle, handguns and gas canisters were found in the vehicle.
French police have taken into custody four members of the family, a source said on Tuesday.
The ex-wife, brother and sister-in-law of Adam Dzaziri were detained late on Monday afternoon after police questioned them at the family home outside Paris.
The assailant's father was also “taken into custody during the evening”, the source said.
Dzaziri was killed in Monday's attack, but there were no other casualties.
READ ALSO: France remains under a state of emergency imposed after the November 2015 attacks in Paris, when Islamic State jihadists slaughtered 130 people in a night of carnage at venues across the city.
The latest attack came two days before the French government is to unveil a new anti-terrorism law, designed to allow the state of emergency to be lifted.
French police launched a major security operation on the famous Champs-Elysées avenue in the west of Paris on Monday after what was believed to be the latest terror attack targeting police in the French capital.
It has been reported that the suspected attacker was subject to an “S” file, meaning that authorities were at some point monitoring him for potential links to extremism.
Members of the public were told to avoid the area after a driver crashed his Renault Megane into a van carrying gendarmes (French military police) at around 15:40. The driver's vehicle (seen in the picture below) then exploded into flames. Police say there was a gas canister inside the car.
“Security forces have been targeted in France once again,” France's new Interior Minister Gerard Collomb said, calling the incident an “attempted attack”.
The weapons and explosives found in the vehicle “could potentially blow this car up,” he added.