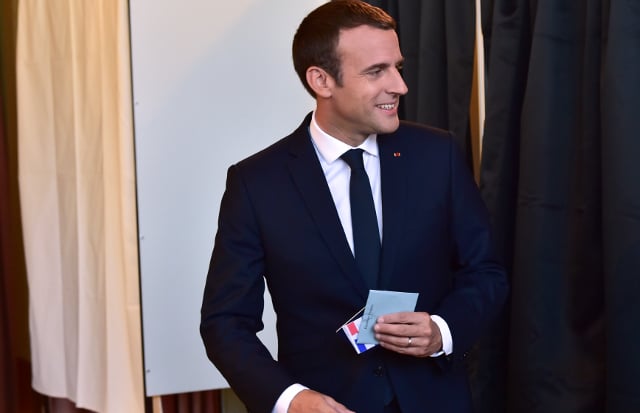 Photo: AFP
Macron's year-old Republique en Marche (Republic on the Move, REM) and their allies won 351 seats in the 577-seat National Assembly, final results showed after the second round of an election which has eliminated many high-profile figures.
The party Macron founded just 16 months ago has re-drawn the French political map, although the winning score was considerably lower than the 470 seats predicted by some pre-vote surveys.
But it gives the 39-year-old president one of France's biggest post-war majorities, strengthening his hand in implementing his programme of business-friendly reforms.
READ ALSO: Photo: AFP
“A year ago, no-one would have imagined such a political renewal,” Prime Minister Edouard Philippe said.
“It is down to the president's desire to breathe new life into democracy and to the French people who wanted to give parliament a new face.”
Macron's success was tempered by a record low turnout of just under 44 percent, leading his opponents to claim he had no groundswell of support.
Desire for change
REM routed the Socialists and heavily defeated the rightwing Republicans, while the far-right National Front (FN) of Marine Le Pen — whom Macron defeated in the presidential run-off on May 7 — had a disappointing night.
Le Pen entered parliament for the first time in her career in one of at least eight seats won by the FN, but the party fell well short of its 15-seat target.
Le Pen's victory in the northern former coalmining town of Henin-Beaumont was a rare bright spot for her nationalist and anti-EU party that was once hoping to emerge as the principal opposition to Macron.
She insisted the FN still had a key role to play, saying: “We are the only force of resistance to the watering down of France, of its social model and its identity.”
The Socialists were the biggest losers, punished for the high unemployment, social unrest and lost national confidence that marked their five years in power.
The party of former president Francois Hollande shed more than 250 seats, obtaining just 29 seats.
“The rout of the Socialist Party is undeniable,” said PS leader Jean-Christophe Cambadelis, who lost his seat in the first round and resigned his position on Sunday night.
Former Socialist prime minister Manuel Valls narrowly retained his seat after a dogfight with a hard-left candidate in the Paris suburbs who demanded a recount amid noisy protests.
But former education minister Najat Vallaud-Belkacem — a one-time Socialist star — was beaten by an REM candidate in the central city of Lyon, while former labour minister Myriam El Khomri lost to Macron-supporting candidate Pierre-Yves Bournazel in the capital.
The Republicans fared better than the Socialists, hanging on to 131 seats, down from over 200 in the last parliament, and remain the main opposition party.
The conservative party had enough seats to “defend its convictions”, said the party's leader for the elections, Francois Baroin, calling on Macron to heed the record low turnout, which he said sent “a message”.
“The task he faces is immense,” he added.
More women lawmakers
The new assembly is set to be transformed with younger, more ethnically diverse lawmakers and 223 women — a record number.
Around half of REM's candidates are virtual unknowns drawn from diverse fields of academia, business or local activism.
They include 27-year-old Rwandan orphan Herve Berville, who cruised to victory in the western region of Brittany, and female bullfighter Marie Sara, who came within 100 votes of unseating senior FN figure Gilbert Collard in southern France.
The other half of the party are a mix of centrists and moderate left- and right-wing politicians drawn from established parties including ally MoDem.
The hard-left France Unbowed won 17 seats as it also struggled to maintain the momentum it had during the presidential election.
Jean-Luc Melenchon, the movement's firebrand leader, won a seat in the southern city of Marseille on a pledge to lead resistance to Macron's radical labour market reforms.
Melenchon also honed in on the record low turnout, saying: “The French people are now engaged in a sort of civic general strike.”
Many observers suggested voters were weary of elections after four in the space of two months.
Apart from loosening labour laws to try to boost employment, Macron also plans to overhaul France's social security system and wants to breathe new life into the European Union.
His confident start at home, where he has concentrated on trying to restore the lost prestige of the president, and his bold action on the international stage has led to a host of positive headlines.
He won instant plaudits from France's closest ally Germany, with Chancellor Angela Merkel's spokesman hailing his “clear parliamentary majority.”