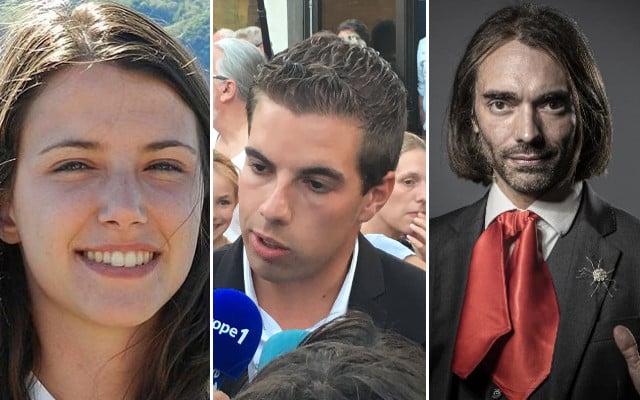 Photo: AFP/ Twitter
Macron's winning centrist army, Republic on the Move party (REM) and its allies MoDem, won 351 seats in France 577-seat National Assembly in Sunday's second round of elections.
Here are some of the key things that will be different about France's new parliament:
It's younger
The average age of France's national assembly has dropped from 54 in 2012 to 48 years and eight months in 2017.
The representatives from far-left party France Insoumise are on average the youngest of the bunch with an average age of 43 years and four months, followed by Macron's REM party where the average age is 45.5.
The far-right National Front MPs have an average of 48 years and eight months and the right-wing Les Republicains representatives are on average 52 years old.
And the youngest MP is…
At 23 years-old, the National Front's Ludovic Pajot the youngest MP in the new parliament, earning him the title of “the Benjamin of the National Assembly” – which is how the French describe the youngest member of a group.
Pajot represents the 10th district in the northern Pas-de-Calais region not far from Marine Le Pen's own constituency, the northern fiefdom of Henin-Beaumont, a depressed former mining town.

But he's far from the only French MP aged in his 20s. Macron's REM party can count 28-year-old Sacha Houlié and 24-year-old Typhanie Degois (see pic below) among their ranks.

At 79-years-old Bernard Brochand, from the right wing Republicans party is France's oldest MP after being elected for the fifth consecutive time in the Riviera resort of Cannes.
READ ALSO: A record number of female MPs
The previous record of 155 women in the National Assembly has been trounced with the benches of the French parliament now home to 223 women MPs, including of course Marine Le Pen, who won a seat at the fifth time of trying.
In all 38 percent of France's 577 MPs are women, that's a big jump to the 27 percent in the previous parliament.
It might not come as a surprise, given Macron's outspoken desire to bring more women into parliament, that his REM party are leading the charge on this front. An impressive 47 percent of REM MPs are women ahead of France Insoumise where 41 percent are women.
Some 38 percent of the Socialist party's 29 seats are women.
Fewer pensioners
With the lowering of the average age of the French parliament comes the knock-on effect of fewer pensioners among the ranks in the 2017 French parliament.
The number of pensioners has dropped by more than half, from 106 to 41.
More MPs from the private sector
Compared to the previous parliament, there will be far more company bosses as MPs. The figure has gone up from 19 to 41.
There are also more managers – mostly from the private sector rather than the public sector, with 59% in 2017 falling into this category compared to 39% in 2012.
The number of MPs coming from a self-employed background has increased from 74 to 103 and the number of former teachers has also gone up, from 47 to 61. The number of general employees has increased from 8 to 21 and the number of farmers has gone up by four, from nine to 13.
These legislatives also saw the election of a student and a labourer, two groups who were not represented in the previous parliament.
Fewer MPs were re-elected
This really was a shake-up for the political establishment, with just 140 out of the 345 candidates seeking re-election succeeding.
In all, 424 of the newly-elected MPs are new to the French parliament. This is the case with all the France Insoumise MPs, 91 percent of REM MPs, 40 percent of Les Republicains and six percent of the Socialist representatives.
New personalities
Much has been made of Macron's interesting collection of candidates for the REM party.
One of these, maths ace Cedric Villani, (photo below) is a 43-year-old star mathematician recognisable by his long hair and colourful floppy bow ties, representing the southern Paris suburb of Essonne.
And the youngest member of Macron's government, is 33-year-old Mounir Mahjoubi, who beat off Socialist Party leader Jean-Christophe Cambadelis and a hard-left candidate for a seat in the multi-ethnic 19th district of Paris.
Other notable figures include François Ruffin, the film director whose popular movie “Merci Patron!” which focused on workers taking on their wealthy boss, thrust him into the limelight.
Ruffin remember, was seen arguing with Emmanuel Macron in the car park of the Whirlpool factory when the presidential candidate was jeered by workers during a campaign visit in April.

Ruffin is supported by Jean-Luc Melenchon's far left France Insoumise party.
Melenchon himself will also join the opposition benches. The fiery 65-year-old, an MEP and former senator who finished fourth in the presidential election, was elected in the Mediterranean port of Marseille. He has vowed a “merciless” battle against the government on workers' rights. The ex-boss of France's elite police unit, Raid, Jean-Michel Fauvergue has been elected as an REM MP in the Seine-et-Marne department to the east of Paris, where he took 67.19 percent of the vote.