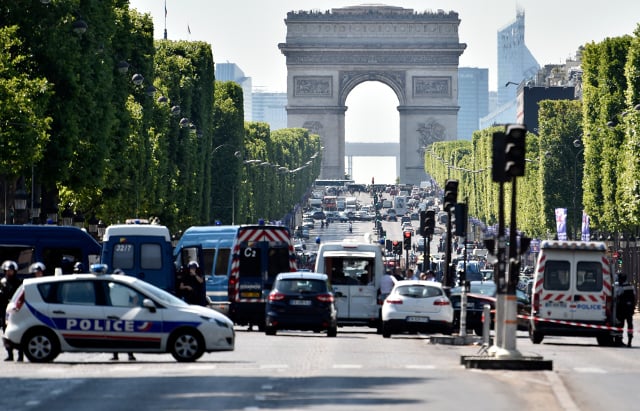 French police launched a major security operation on the famous Champs-Elysées avenue in the west of Paris on Monday after what was believed to be the latest terror attack targeting police in the French capital.

It has been reported that the suspected attacker was subject to an “S” file, meaning that authorities were at some point monitoring him for potential links to extremism.

Members of the public were told to avoid the area after a driver crashed his Renault Megane into a van carrying gendarmes (French military police) at around 15:40. The driver's vehicle (seen in the picture below) then exploded into flames. Police say there was a gas canister inside the car.

“Security forces have been targeted in France once again,” France's new Interior Minister Gerard Collomb said, calling the incident an “attempted attack”.
The weapons and explosives found in the vehicle “could potentially blow this car up,” he added. Police sources have told French media they believe the act was deliberate and anti-terrorist police have been called in to take charge of the investigation.

#ChampsElysees: Gérard Collomb, Minister of Internal Affairs of France, personally arrived at the scene of the terrorist attack. pic.twitter.com/u0rF40BjKY

There were no casualties reported and no police officer or member of the public was injured.

However Pierre-Henry Brandet a spokesman for Interior Ministry said the driver, who was pulled from his car by police, appeared to have died, but it could not be confirmed officially due to the ongoing security operation.

“A bomb disposal operation is under way to ensure the vehicle poses no further danger,” spokesman Brandet said at the scene. Police sources had previously said the driver was “unconscious on the ground”. Police sources told AFP he was armed with a Kalashnikov, hand guns and gas bottles.

According to BFM TV sources the driver was a 33-year-old, known to intelligence services. He was what's known as “fiche S” in French, meaning he was considered a threat to security.

By 5pm the situation on the Champs-Elysées was “under control”, according to the police. Images posted on social media showed a huge police presence around the area that is normally packed with tourists and shoppers. A huge area around the lower end of Champs-Elysées avenue was cordoned off by police.

One witness, a journalist with French daily Liberation who was travelling down the Champs-Elysées on his scooter said he saw a car that appeared to have blocked the police van. “The gendarmes jumped out of their vehicles and then I saw an explosion in the passenger seat,” said Eric Favereau.

“The gendarmes rushed to their truck to take out tools and break the windows of the car,” he said.

On top of the arc de triomphe street closed at champs elysees at least 15 cop cars from what I can tell #paris #ChampsElysees pic.twitter.com/SHkI2PEOly

“They manage to open the car, which was on fire. They pulled out a man and they pull him to the ground while others used fire extinguishers,” the witness added.

Police have closed two of the metro stations on the Champs-Elysees, a major tourist draw in the French capital.

i don't know what's happening but there are a lot of police here #ChampsElysees pic.twitter.com/AWaQlmi4sC

France has been on high alert for terrorism after a string of deadly attacks in recent years, many of which have targeted police officers and soldiers.

In April a jihadist shot dead a police officer on the Champs-Elysées and seriously injured two others just days before the first round of the presidential elections. A note praising the Islamic State group was found next to the body of the gunman, Karim Cheurfi, in that incident.

Police later found other weapons in Cheurfi's car including a shotgun and knives.

Man on the ground on #ChampsElysees. Avenue blocked off with heavy police presence pic.twitter.com/Xdw2vAWEog

Monday's Champs-Elysées attack is just the latest that has taken place in one of the French capital's most iconic tourist spots.

Earlier this month, an Algerian student launched a hammer attack on a policeman outside the Notre Dame Cathedral. And in February this year a man tried to attack soldiers with machetes.

In 2015 terror attacks in the capital left almost 150 dead, including the devastating attack on the Bataclan music hall.

Paris authorities made efforts to step up security at tourist spots in the capital. A project is underway to install a bullet proof glass wall around the base of the Eiffel Tower.