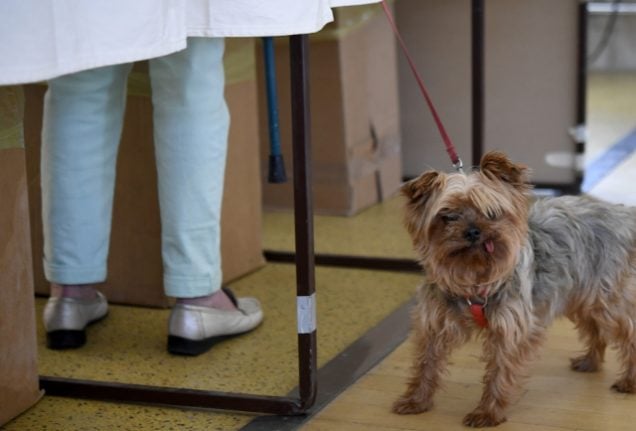 Photo: AFP
French polling institute Elabe is predicting just 42 percent of potential voters will cast a vote in Sunday's parliamentary elections in France.
If the predictions hold true, this will be the lowest voter turnout in French parliamentary elections under France's Fifth Republic, which began in 1958.
In total, 47 million people were called on to vote but if the polls are right many millions have stayed away.
At 5pm, official statistics showed turnout was 35.3 percent, compared with 46.4 percent at the same time in the last election five years ago.
READ ALSO: Photo: AFP
Although Macron's REM party is tipped to win a landslide in parliament, Prime Minister Edouard Philippe had urged voters to come out to vote in the second round to give the new centrist government legitimacy.
Experts have blamed a number of factors for the high abstention rate, including election fatigue after four rounds of voting in the space of two months to elect a president and a parliament.
“Go to vote!” Philippe said while campaigning in southern France late on Thursday. “It's the same message here as everywhere else: no one should abstain. In France voting is not obligatory… it is a right and a responsibility.”
Macron's year-old Republic on the Move (REM) party and its allies are tipped to win a landslide in the run-off election for the 577-member lower house of parliament.
Pollsters forecast them securing up to 470 seats, but low turnout in the first round has led critics to question the strength of the mandate for Macron's ambitious reform agenda.
In the first round, the abstention rate hit a nearly 60-year high of 51.3 percent and is forecast to rise to 53-54 percent in the run-off, much higher than the 44.6 percent in the last election five years ago.
Sunday's results promise to deliver huge change to the National Assembly, bringing in a younger, more ethnically and socially diverse generation of lawmakers, many of whom are new to politics.
But there are reasons why a resounding victory in the parliamentary elections for Emmanuel Macron's party could spell bad news for France and the president himself.
Without a strong mandate, he will be operating without the backing of the majority of the French people.
Political scientist Jerome Sainte-Marie noted that only one in three potential voters actually cast ballots for REM candidates in the first round of the parliamentary elections, given the 49 percent turnout in Sunday's first-round parliamentary vote, in addition to eligible voters who did not register and those who cast blank or spoilt ballots.
Remember this comes after 16 million voters abstained in the second round of the presidential election when Macron was up against Marine Le Pen, added to that are the 10 or so million voters who said they only backed Macron to keep Le Pen out.
“The abstention reflects the disaffection (with politics) of part of the French electorate, notably the working class,” Sainte-Marie said, adding: “Young people… were especially demoralised by the presidential election.”