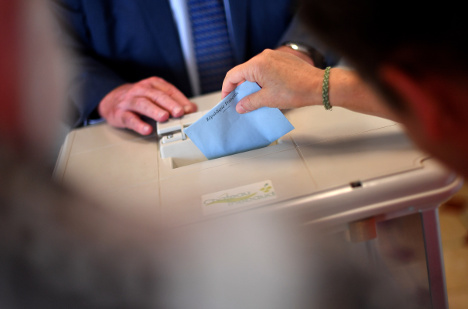 In the first round, the abstention rate hit a nearly 60-year high of 51.3 percent. Photo: Loic Venance/AFP

Macron's year-old Republic on the Move (REM) party and its allies are tipped to win a landslide in the run-off election for the 577-member lower house of parliament.

Pollsters forecast them winning up to 470 seats, but low turnout in the first round has led critics to question the strength of the mandate for Macron's ambitious reform agenda.

In the first round, the abstention rate hit a nearly 60-year high of 51.3 percent and is forecast to rise to 53-54 percent in the run-off, much higher than the 44.6 percent in the last election five years ago.

“Go to vote!” Philippe said while campaigning in southern France late on Thursday. “It's the same message here as everywhere else: no one should abstain. In France voting is not obligatory… it is a right and a responsibility.”

Sunday's results promise to deliver huge change to the National Assembly, bringing in a younger generation of lawmakers, many of whom are new to politics.

Macron, a 39-year-old centrist unknown to most people three years ago, looks on course to complete his revolution of French politics by securing a massive majority.

“We've shot down everything that represented the system before and we're trying something else,” said historian Didier Maus, who sits on France's Constitutional Council.

France is on course for the “biggest overhaul of its political figures since 1958 and perhaps 1945,” he said.

REM has fielded a mix of centrists and moderate left- and rightwingers drawn from France's established parties, as well as complete newcomers including a star mathematician and a former bullfighter.

A new poll published on Thursday underlined the scale of the losses for France's main right-wing Republicans party and Socialists who have dominated French political life for decades.

REM and its allies were tipped for 440-470 seats, the Republicans and its allies for 70-90 seats and the Socialists 20-30 seats — a loss for them of more than 200 seats after their five years in power under president Francois Hollande.

The survey by Opinionway Orpi also suggested a rout for the far-right National Front, which was forecast to win no more than five seats, far below expectations for the party led by Marine Le Pen — the rival Macron defeated for the presidency in May.

Some analysts warned however that voters might turn out in greater numbers on Sunday to try to stop REM securing too large a majority which would lead to almost no opposition to Macron's agenda.

“There might be a correction,” said Emmanuel Riviere from the Kantar Sofres polling group.

Many opposition leaders have stressed the danger of Macron facing little opposition or scrutiny from parliament under a constitution that confers huge powers on the president.

“If there is no opposition in the parliament, it will either be in the media or on the street,” Socialist party leader Jean-Christophe Cambadelis said earlier this month.

Cambadelis was one of many party heavyweights who lost his seat in the first round of voting on June 11th.

Former right-wing prime minister Jean-Pierre Raffarin has urged voters to remember that “we are not electing an emperor.”

The vote on Sunday will be the final stage of France's presidential and parliamentary election sequence which started in November last year with a primary to pick the candidate of the right-wing Republicans party.