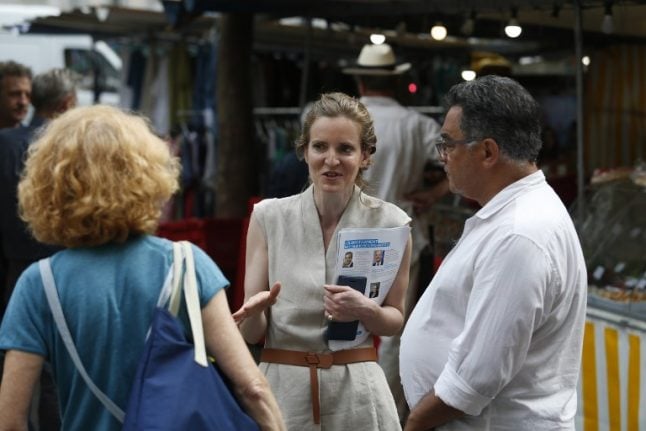 But after Sunday's parliamentary election, the flamboyant right-winger could be looking for a new career.
NKM, as she is known, is one of scores of heavyweights fighting for survival in the second round of a race that has already claimed dozens of household names from the left and right — crushed by President Macron's centrist insurgents.
On Thursday, the former environment minister from the centrist wing of the Republicans felt first-hand the hostility towards politicians that has been laid bare during this year's elections.
While campaigning on a Paris market the slightly built candidate was attacked by a man who called her a “stupid bobo (a blend of hipster and bourgeois)” and shoved her leaflets in her face, causing her to fall and black out for several minutes before being rushed to hospital.
READ ALSO: All photos: AFP
The incident, which follows a raft of flour and egg strikes on candidates during the presidential campaign, triggered an outpouring of sympathy for the Republicans politician — a former spokeswoman for ex-president Nicolas Sarkozy whom polls show being beaten for a seat in Paris's Left Bank by a 59-year-old Macron-backed neophyte.
“Very shocked by the attack on @nk_m. Violence has no place in politics,” tweeted Economy Minister Bruno Le Maire, a former fellow member of the right-wing Republicans who jumped ship to Macron's camp.
'Backing the wrong horse'
Kosciusko-Morizet's uphill battle in the well-heeled 5th, 6th and 7th districts of Paris encapsulates the tainted nature of France's political elite.
Her rival Gilles Le Gendre, a 59-year-old business consultant, scored 41.8 percent to her 18.1 percent in last weekend's first round, setting up a lopsided run-off.
Le Gendre is among 400 candidates from Macron's 16-month-old Republic on the Move party tipped to win seats in the 577-member National Assembly, blindsiding the Republicans and Socialists who have dominated politics for more than half a century.
The opposition has warned that giving the ruling party an overwhelming majority would silence debate.
“The French feel they lost five years (under Socialist president Francois Hollande) and they don't want to lose another five. That's understandable,” Kosciusko-Morizet told AFP on Wednesday after a coffee morning with a group of parents.
“The question now is whether there remains space for other voices, including a modern and open right,” said the blue-blooded mother of two, who hails from a long line of politicians and has pledged support for Macron's economic reforms.
For Elisabeth, a 50-year-old doctor who attended the meeting, Kosciusko-Morizet's mistake was to stick by scandal-hit Republicans presidential candidate Francois Fillon instead of jumping aboard the Macron train.
“They were made to work together. She just backed the wrong horse,” said the doctor, who did not wish to give her full name.
Kosciusko-Morizet accuses Macron of seeking revenge for her refusal to join his government — pointing to his decision to run a candidate against her, while leaving other “Macron-compatible” politicians from the right and left unchallenged, as proof of a vendetta.
'Efficiency first'
Le Gendre, a nattily-dressed business consultant who had never been involved in politics before joining Macron's campaign a year ago, admits that the main factor in his stunning first-round win was “the very strong Macron momentum”.
He rubbishes the idea that a parliament dominated by rookies who owe their seat to Macron could give France's youngest-ever leader a de facto monopoly on power.
“Ours is not a party that has existed for 15 years and which is taking back power after having lost it. We are creating a new movement with men and women from the left, the right, the centre and civil society that symbolises diversity,” he told AFP.
At a market where he posed for photos with Macron fans on Wednesday many voters appeared unfazed by the prospect of Macron having free rein to implement his far-reaching labour, economic and security reforms.
“We are delighted that the old guard are being turfed out,” Bernadette Dufour, a 77-year-old retired legal secretary, said as she pulled a shopping trolley past a stall of pungent cheeses.
A staunch left-winger who soured on the Socialists after they tacked to the centre, Dufour plans to abstain during Sunday's run-off between Le Gendre and Kosciusko-Morizet.
But she hopes Macron will get his majority nonetheless.
“I hope he will do some good things and that in time a new left will emerge to act as a counterweight,” she said.
Url copied to clipboard!