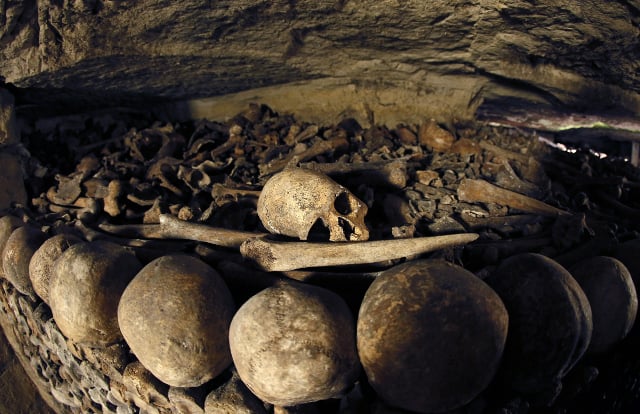 Photo: AFP
The two teenagers, aged 16 and 17, were taken to hospital and were being treated for hyperthermia after being found by search teams and rescue dogs in the early hours of the morning.
“It was thanks to the dogs that we found them,” a spokesman for the Paris fire service told AFP at the end of the four-hour operation.
A network of around 250 kilometres (150 miles) of underground tunnels forms a maze beneath Paris, with only a small section open to the public at an official visitors' site in southern Paris.
Entering the other galleries has been against the law since 1955, but daredevil school children, explorers and alternative partygoers are known to access them through secret entrance points.
READ ALSO: The transfer of human remains from Parisian cemeteries to the tunnels began towards the end of the 18th century for public health reasons, with the bones of approximately six million people found there.
The ambient temperature in the dank narrow passageways is about 15C.
It was not clear who had raised the alarm about the missing teenagers or why they got lost.
The operator of the Catacombs museum, a popular attraction where the queues are sometimes several hours long, stressed that no-one had ever got lost in the two-kilometre (over one mile) of tunnels open to the public.
Url copied to clipboard!