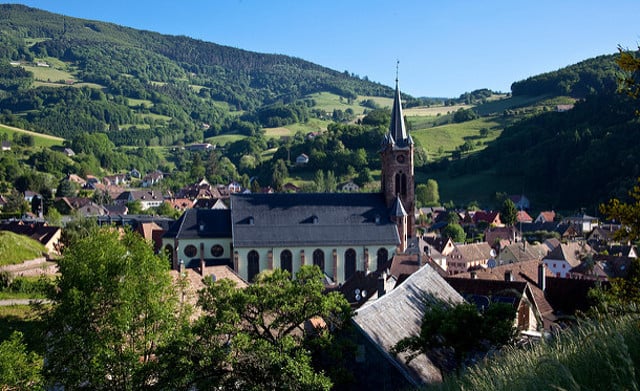 Photo: Allan Harris/Flickr
Kaysersberg in Alsace in northeastern France has been anointed France's favourite village in 2017 by viewers of the programme “Village préféré des Français”. With its cobbled streets and stone chateau it's hard to question Kaysersberg's charm. And after competing with 12 other villages on Tuesday evening for the title of France's favourite village, it seems the French agree.
And the result clearly went down well with the locals, known as Kaysersbergeois. Check out the video in the tweet below which shows the moment they found out theirs was the country's favourite.

Despite being small, a walk around the village of Kaysersberg in the Haut Rhin department in the former region of Alsace, north east of France offers an impressive collection of architectural styles. The main sites include the Church of Sainte Croix dating back to 1230, the Oberhof Chapel from 1391 and the Chapel of Saint-Alexis from the 16th century.
READ ALSO:
Photo: Dumb Luck/Flickr
But with a population of 2,700, France's favourite village actually just crosses the threshold to officially count as a town (villages should have a population of under 2,000).
Photo: Allan Harris/Flickr
Winning the much-coveted title is expected to boost tourism in Kaysersberg, which already welcomes 700,000 visitors each year.
Photo: GK Sens-Yonne/Flickr
Runners up for this year's title were the medieval village of Saint-Valery-sur-Somme in the Somme department in northern France and La Roque-Gageac, a village bordering the Dordogne river in the southwestern department of Nouvelle-Aquitaine. Photo: Allan Harris/Flickr
Photo: Guillaume Speurt/Flickr
Kaysersberg is the second village in Alsace to win the competition since it started in 2012. The first was Eguisheim in the Haut-Rhin department in 2013.
Brittany has dominated the competition for the past two years with the pretty village of Rochefort-en-Terre  (see first photo below) in the Morbihan department winning in 2016 and the village port of Ploumanac'h in the Côtes-d'Armor department taking the title in 2015. (see second photo below)