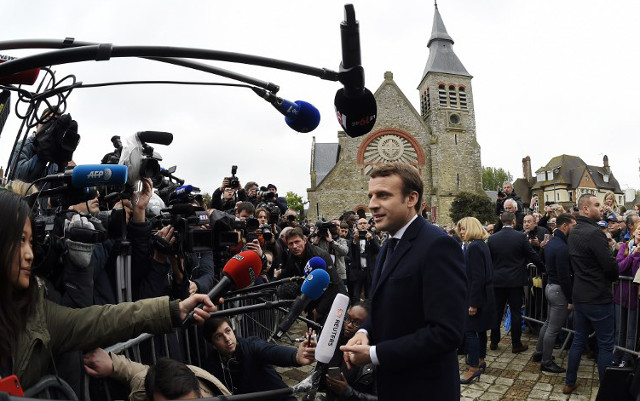 Photo: AFP
In commentary posted on several websites, the Societe des Journalistes (SDJ) chapters accused the government formed last month of using pressure tactics and legal threats against their journalists.
Signatories include Agence France-Presse's SDJ chapter as well as those of the dailies Le Monde, Liberation and Les Echos, and of the broadcasters Radio France, Europe 1, BFMTV and France 2.
The commentary states that last week, “two ministers sent extremely worrying signals regarding the way they conceive of the independence of media and the protection of sources.”
On Friday, the labour ministry lodged a complaint for document theft after an article in the left-leaning Liberation that set out details of the government's plans to overhaul the labour code — a hot-button issue in France.
READ ALSO: Photo: The Local
Although the government said the complaint was not aimed at the newspaper but the source of the leak, the SNJ-CGT union saw it as a “signal intended to muzzle the profession”.
Late last week it emerged that Justice Minister Francois Bayrou contacted a director of Radio France to complain over calls by its journalists to his MoDem party, describing them as “harassment”.
Bayrou's intervention came a few hours before Radio France aired an investigation into the hiring of parliamentary assistants by MoDem MEPs.
MoDem is a small centrist party allied with Macron's Republic on the Move (REM) party.
The SDJ chapters also voiced concern over a complaint lodged by REM last month against political newsletter Lettre A over an article that cited hacked REM party information.
On Tuesday, Prime Minister Edouard Philippe criticised Bayrou on France Info radio, saying the justice minister should show “exemplary” behaviour.
“When you are a minister you can no longer react as you would as a simple citizen,” he said.
But Bayrou insisted to reporters later Tuesday: “Anytime I have something to say… whether to political officials or those in the media… I will say it.”