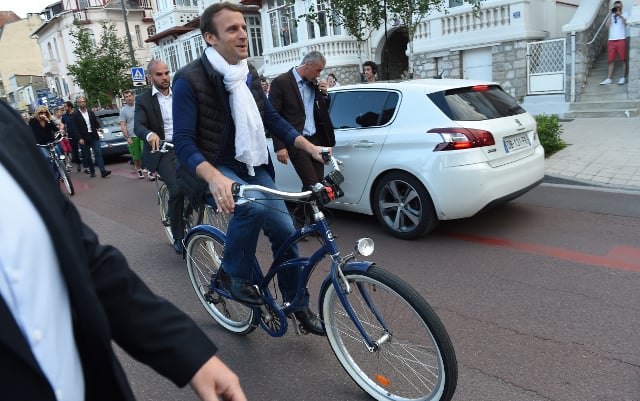 Macron's mandate is hardly the strongest

“It's a muted, incomplete victory because he does not enjoy the backing of a majority of the French people,” pollster Gael Sliman told AFP.

The low turnout could be explained partly by election fatigue, but also by “those who may not agree with Macron but do not want to block his path,” said Sliman, of the Odoxa polling institute.

Political scientist Jerome Sainte-Marie noted that only one in three potential voters actually cast ballots for REM candidates, given the 49 percent turnout in Sunday's first-round parliamentary vote, in addition to eligible voters who did not register and those who cast blank or spoilt ballots.

Remember this comes after 16 million voters abstained in the second round of the presidential election when Macron was up against Marine Le Pen, added to that are the 10 or so million voters who said they only backed Macron to keep Le Pen out.

“The abstention reflects the disaffection (with politics) of part of the French electorate, notably the working class,” Sainte-Marie said, adding: “Young people… were especially demoralised by the presidential election.”

The record-low turnout — the lowest in six decades — “reveals a pretty weak sociological and political foundation for the new administration,” said Sainte-Marie, of the PollingVox institute.

The Macron team itself recognised the liability, with spokesman Christophe Castaner calling the low turnout “a failure of this election” and emphasising the need to reach out to those who stayed away.

Bad for a healthy democracy?

French President Emmanuel Macron's rivals on Monday warned against handing him an overwhelming parliamentary majority that would stifle debate, after his party cruised to victory in the opening round of elections to the National Assembly.

Macron's year-old centrist Republic on the Move (REM) party and its allies are tipped to clean up in the 577-member lower house of parliament, winning up to 445 seats — an unprecedented total for a post-war president.

The opposition and French press expressed concern over what the left-wing Liberation daily called the “quasi-Stalinist result”.

The leader of the rightwing Republicans in the Paris area, Valerie Pecresse, appealed for a “civic surge”, warning of the risk of “groupthink”.

Ex-prime minister and party grandee Alain Juppe said, urging voters to get behind the opposition “The stakes of the second round are clear,” . “Having a monochrome parliament is never good for democratic debate,” he added. Macron made the most of weakness and scandals to blow apart France's traditional political parties in the presidential election and he continues to do the same in the parliamentary elections.

“What is new about this election is that opposition forces have crumbled,” said Martial Foucault, director of the Cevipof research centre.

“We don't know who will really embody the opposition, and that is the gamble Emmanuel Macron took and won — spreading his political tent as widely as possible to the left and right,” Foucault told French radio.

The Macron juggernaut left behind an opposition made up of “irreconcilable parts” — the radical left, the far right and the traditional left and right, Sainte-Marie said.

But while many in France, even Macron's opponents are keen for him to be given a chance to govern and reform the country, the lack of necessary checks and balances that a strong opposition in parliament would provide, may prompt opposition in other forms.

Dissent will be on the streets not in the Assembly

Sunday's results show Macron will have a relatively free hand to push through the ambitious labour, economic and social reforms he promised on the campaign trail.

He will also have succeeded in ushering in a younger and more diverse parliament with more women and ethnic minorities.

But with many of the new lawmakers owing him their seats, analysts have warned that the next parliament could be unusually submissive.

Macron's opponents have already warned that they will take the fight to the streets.

A group of trade unions and NGOs opposed to his proposals to loosen the country's strict labour laws have called for demonstrations in several cities on June 19.

With Macron planning to pass his labour reforms through decrees we can expect the street protests to be particularly lively. Martial Foucault, director of the Cevipof research centre warned that with scores of REM lawmakers taking elective office for the first time, “there will be a learning curve, a period of discovery that may lead to a kind of disillusionment.”

Furthermore, “these new lawmakers will want to do well, to succeed on a political programme that in my view is not yet totally clear. We don't know really what targets they have. We have some economic details but it's very vague regarding social benefits,” Foucault told French radio.

What is more, Sliman said, the new MPs owe their political life to Macron, who launched his movement barely a year ago. “Never have there been so many lawmakers so beholden to their leader,” he said. “They owe absolutely everything to him.”

Macron runs the risk of believing “that just because everyone around him agrees with him, all the French do,” Sliman said. “He'd be wrong.”

Pascal Perrineau, a researcher at Cevipof told AFP: “Within this gigantic parliamentary party there could be internal difficulties. At first this (majority) will seem like a gift from heaven, but it will eventually be seen as a difficulty.”

In other words Macron's new pop-up party will at some point be beset by the same problems that afflicted his opponents and enabled him to take power.