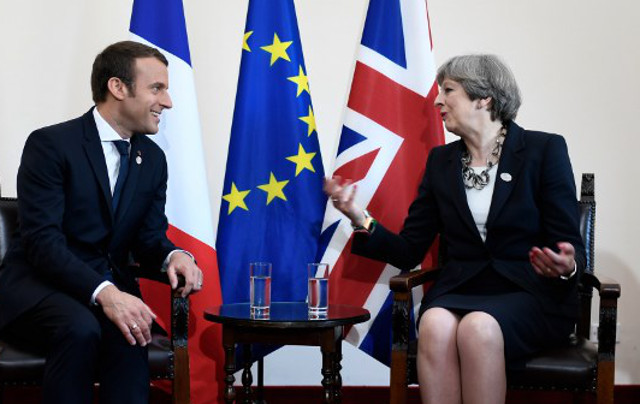 British Prime Minister Theresa May had hoped to be in Paris on Tuesday with a strong popular mandate for a “hard” Brexit.

Instead she finds herself meeting French President Emmanuel Macron enfeebled and isolated.

The difference in their fortunes is striking: He is a young new centrist leader seemingly clearing all obstacles from his path after standing in his first-ever election this spring.

She is a 60-year-old right-wing veteran who bungled a snap election last week and is now fighting to keep her job following the loss of the Conservative party's majority in the British parliament.

Over a working dinner and at a football match together, May and Macron had been expected to discuss Brexit and deepen a relationship that would be crucial during Britain's divorce from the European Union.

But uncertainty about May's future has led to reassessments only days before the expected start of Brexit negotiations in Brussels.

“Everyone assumes that she's a zombie,” Francois Heisbourg, a former French diplomat and chairman of the International Institute for Strategic Studies in London, told AFP.

He also repeated the conclusion of May's former cabinet colleague George Osborne, now the editor of the London Evening Standard newspaper, who called her a “dead woman walking”. Macron on the other hand is stronger than ever, with his new centrist party Republic on the Move (REM) on course for a landslide victory in parliamentary elections that conclude next weekend.

In the first round on Sunday, REM and its allies finished top with 32.32 percent and they are forecast to win between 400 and 445 seats in the 577-member National Assembly.

Macron's stunning election has also helped tip the balance further away from Britain, with the European Union appearing stronger and more united than many observers expected.

When Britain voted to leave the EU in June last year, some analysts saw it triggering a domino effect which could lead to the unravelling of the post-war European integration project.

But elections in Austria, the Netherlands and then France have failed to produce the results that eurosceptic parties were hoping for and, in the case of France, have led to the opposite: the election of a fervently pro-European leader.

Russell Foster, an expert on European and international relations at King's College London, said that  Macron “is now looking more and more like the leader of the EU”.

And he warned that the 39-year-old, who has made clear his contempt for Brexit and the leaders of the Leave campaign, “wants a hard Brexit precisely because he is so pro-European”.

The French president is eager to show the benefits of EU membership and is intent on proving that the 27-member bloc, excluding Britain, is the best shield for European citizens in an age of globalisation.

“This is Emmanuel Macron's short window of opportunity to push for a very strong federalist Europe,” Foster added.

The two leaders are set to hold a press conference and then have a brief dinner at the Elysee palace on Tuesday evening before attending a friendly football match between England and France at the national stadium in Paris.

There will be a minute's silence to honour victims of recent attacks in London and Manchester before the game. French organisers have also switched the order of the anthems which will see home fans sing “God Save the Queen” last.

While far apart on Brexit, Macron and May share common ground on the need for closer cooperation at the European level to fight terrorism, which they discussed when they met at the G7 in Italy and at a NATO summit in Brussels late last month.

“I would expect that conversation to continue tomorrow. They may well discuss aspects of Brexit but the main focus will be on counterterrorism,” May's spokesman said on Monday.

It is believed the pair will present a united front in calling for a crackdown on extremist material being allowed to be published and shared on the internet.