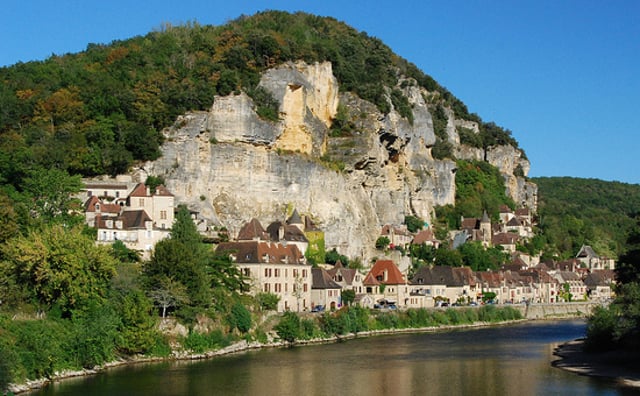 Viewers of the programme “Village préféré des Français“ are once again being asked to decide which is their favourite village in France.

But instead if choosing one, we think you'd better off visiting all 13, although they are spread far and wide so it might take you a while, but they are well worth the detour.

Nestled at the foot of a cliff, the picturesque village of La Roque-Gageac in the Nouvelle-Acquitaine region of southwestern France commands spectacular views of the Dordogne river.

Lagrasse
This medieval village in the Aude department of  southern France is renowned for its beautiful centre, as well as a stunning abbey. Surrounded by hills, it's the perfect picture postcard French village.

Despite being small, a walk around the village of Kaysersberg in Alsace, north east of France offers an impressive collection of architectural styles. The main sites include the Church of Sainte Croix dating back to 1230, the Oberhof Chapel from 1391 and the Chapel of Saint-Alexis from the 16th century.

The historical village of Beze in the Côte d'Or department of eastern France has a rich history that includes being chosen as a location for a monastery by a duke as early as the year 630. Undoubtedly one of France's most beautiful villages, Gargilesse-Dampierre in the Indre department of central France is known for attracting artists and writers, including literary legend George Sand, with its unique charms. The pretty village of La Garde-Adhémar in the Drome department in southeastern France owes its aesthetic appeal in part to the white stone used to build it. Add to this its spectacular views over the Rhone valley and you have a perfect French village. This stunning village is located on the peninsular of Guerande in the Pays de la Loire department of western France. The website France Voyage says Piriac is “a very charming fishing port that has won over such famous French writers as Flaubert and Zola. The beautiful granite houses lining the port add to its authenticity.”

The medieval village of Saint-Valery-sur-Somme that stands on a limestone promontory on the mouth of the River Somme in northern France, is already a member of the “Most Beautiful Detours in France” network. Visitors will fall for the ancient cobbled streets lined with flowers and be impressed by the remains of the medieval ramparts and towers around the village. This village, is one of the oldest on the island of Corsica, with history dating back to the 9th century. It stands at 500m above sea level just north east of the port town of Calvi and is billed as the “most beautiful village in northern Corsica”. “Because of its dramatic situation clinging around the top of a hill the village is sometimes referred to as the 'Eagles Nest',” says the site Corsica Travel Guide. The historic Moncontour, near the town of Saint-Brieuc in northern Brittanyis perfectly picturesque andcrowned by its highly decorative church. It’s surrounded by impressive ramparts dating back to the 13th and 14th centuries. The village of Montchauvet to the west of Paris is still home to its medieval bridge, fortified gate, and a historic church. A British bomber was shot down here during World War Two, the crew are buried in the village cemetery. Loumarin is a peaceful village nestled in the middle of vineyards, olive groves and almond trees in the Luberon part of Provence, southern France. It is home to a stunning belfry, a Roman church and a Renaissance château. It’s also famous for its market.

Bordering one of the country's most beautiful forests, the medieval village of Belleme in the Orne department in northwestern France is ideally placed. While at its centre, you can explore its prettily coloured historic buildings. 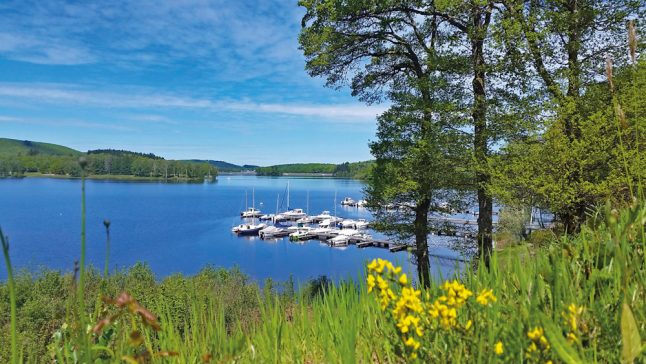 We’re social creatures, but after a prolonged confinement, and with an open-ended need to avoid big social gatherings, the idea of heading off to enjoy the great outdoors is sounding more attractive than ever before. Fortunately, here in Nouvelle-Aquitaine we don’t need to venture too far to find perfect peace, so here are some of our favourite away-from-it-all spots.

Canoe or kayak on the Dordogne (24)

When visitors are jostling for parking spaces at Périgord’s attractions, both big and small, why not take to the water and see things differently at your own pace? You can hire a canoe or kayak from various locations on the Dordogne (and other rivers around the region). Choose from a short 90min taster or a longer trip lasting up to a full day, paddling gently downstream to a pick-up point for a bus-ride (included) back to where you originally set off. Located on the tip of a modest peninsula extending into the Baie de l’Aiguillon below La Tranche-sur-Mer, there’s a satisfying sense of away-from-it-all remoteness among the windswept sand dunes. The nearby reed-beds, tidal mudflats and wetlands at the mouth of the Sèvre Niortaise river make this a halt for countless migrating and nesting birds, so the spot is a protected nature reserve. There’s also a small beach, if you feel like a bracing stroll.

There are few more relaxing pastimes than gazing idly into the gently flowing currents of one of our rural waterways. They make great walking or cycling companions, and the antics of those messing about on the river can be high on entertainment value, particularly when negotiating locks. Vibrac, between Angoulême and Jarnac, offers just this kind of escape, as the River Charente divides briefly into three courses – and there’s a lock. This near endless succession of fine sandy beaches between Ronce-les-Bains and La Palmyre offers lots of opportunities for anyone in search of some plage-style open space (with more beaches almost to Royan). Along the way lie some interesting landscape features, including WWII defences and the incredible Phare de la Coubre lighthouse overlooking the Gironde Estuary. There are lots of cycling opportunities too, including a section of the 1,200km Vélodyssée long-distance route.

Here’s a little-known area whose leafy lanes take very little traffic, even in summer. Add the fact that there are few hills but some great unspoilt scenery and you have fantastic cycling country. It’s now part of the Vélo Francette, in fact, which links Caen Ouistreham (14) with La Rochelle (17). A good starting point is historic Parthenay, from which you can ride to Gourgé for a lunch stop, or continue to the chateau town of Thouars (37km). A glance at the map reveals the vast scale of this outdoor playground straddling the Creuse/Haute-Vienne border. With a surface area of 1,000 hectares and shoreline paths extending to around 30km, there’s plenty of potential for walking, cycling, fishing or waterborne activities – or simply finding your own secluded space away from the rest of the world. Here and there you might almost believe you’re in Canada, and there’s lots more landscape to explore on the surrounding Plateau de Millevaches (see separate entry). Limousin’s vast upland Parc Naturel Régional benefits from green tourism, yet remains sparsely populated – what isn’t forested is mostly pastures and rugged heathland grazed by hardy sheep and cattle. Here and there granite outcrops compete for attention with the outlines of the nearby Monts d’Auvergne, while the Vienne and other rivers spring into life here, adding to the biodiversity and making this a haven for walkers, kayakers and anglers.

A real curiosity, some 142 hectares of the landscape below Châtellerault is peppered with thousands of indentations from centuries of granite extraction for circular millstones. Around half are water-filled, and the rich diversity of habitats, flora and fauna makes this a protected national nature reserve. Freely accessible all year, there’s a 2km discovery trail to help you get the most from your visit – or join a guided tour.

For a relaxed waterside walk, and perhaps a family picnic, two large man-made lakes between Chabanais and Massignac are worth getting to know. Lac de Lavaud and Lac du Mas Chaban offer canoeing, sailing, windsurfing, angling, etc., but without compromising their natural appeal. That’s something which attracts many bird species, which can best be appreciated at the Observatoire Ornithologique de Foucherie on the shores of Lac de Lavaud. Get back to nature with a host of flora and fauna for company in the ancient Forêt Domaniale de la Braconne, which covers around 4000 hectares of the Charente landscape between Angoulême and La Rochefoucauld. The kind of forest you always hoped you’d find, around half of the trees are noble, mature oaks, among which are way-marked trails, with interpretation panels giving information about wildlife you might encounter. There are also picnic tables plus a 4km discovery circuit, supported by a  ‘Défi Braconne’ smartphone app. (Find out more – see our dedicated feature in the Oct/Nov 2018 issue of Living.)

Robert Louis Stephenson famously travelled through the Cévennes with a donkey, and you can still do something similar nearby with a four-legged friend for company. You’ll find that it’s an enjoyable way to unwind for an afternoon, and if you want more you can do it in style by spending several happy days exploring lanes and tracks through villages, peaceful valleys, rivers, streams and much more in the rural landscapes of Poitou and Limousin. Everything is organised. You’ll be following a carefully pre-prepared itinerary, and can sleep soundly each night under canvas, in a caravan or if you prefer in chambres d’hôtes. Summertime is a busy period for popular sites on the coast, but come to this diminutive island in the early evening and you should have few people for company. You’ll find it at the mouth of the Charente river, just off Port des Barques, from which it’s accessed via a slender tidal causeway – la Passe aux Bœufs. Beyond it are some surprising features, including a 17th/18th century fort complex, a poignant monument to 254 martyred priests, an organic ‘ferme aquacole’ with a restaurant, an auberge and some contented Scottish black-face sheep, all set within a rocky shoreline dotted with traditional fisherman’s carrelets. Living Magazine is the leading English-language magazine for the south west of France written by individuals who live here and are passionate about the region, it’s landscape and its culture. Every two months, we produce a 68-page magazine celebrating the area with stunning photos and in-depth features. Read the online copy or better still, subscribe and have the October edition delivered to your door anywhere in the world. 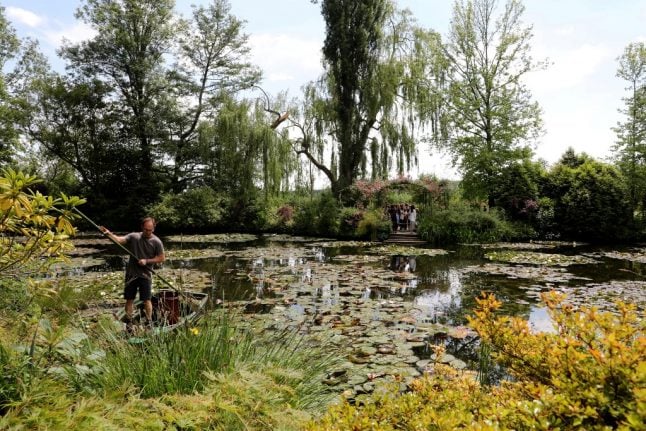 WEATHER
32C! How summer will make an unseasonal return to France this weekend
Url copied to clipboard!