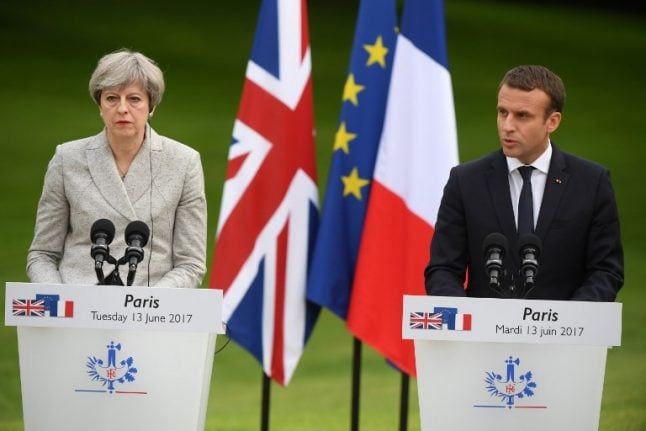 “Of course the door is always open as long as the negotiations on Brexit have not finished,” Macron said in a press conference.

But he stressed that the British people had taken the sovereign decision to leave the 28-member bloc in their referendum a year ago, adding that the start of talks was an important milestone.

“Once it (the Brexit process) has started we need to be collectively clear that it's more difficult to reverse course,” he said at the Elysee palace.

May stressed that she would stick to her timetable of starting Brexit discussions next week in Brussels, saying the talks were “on course” despite her domestic difficulties.

Her Conservative party lost its parliamentary majority in a bungled snap election last week which some observers suggested might lead May to abandon her plans for a so-called “hard Brexit”.

May and Macron announced a joint action plan to crack down on extremism and terror propaganda online, accusing internet companies and social media networks of doing too little to tackle the scourge.

The measures aim “to ensure the internet cannot be used as a safe space for criminals and terrorists and it cannot be used to host the radicalizing material that leads to so much harm,” May said.

Priorities include looking into encrypted communication platforms used by extremists to evade security forces and new laws to impose penalties on internet companies which fail to remove offensive content.

Facebook, Twitter and other social networks had long argued that they were unable to monitor content posted online by their users, but have grown increasingly sensitive to criticism.