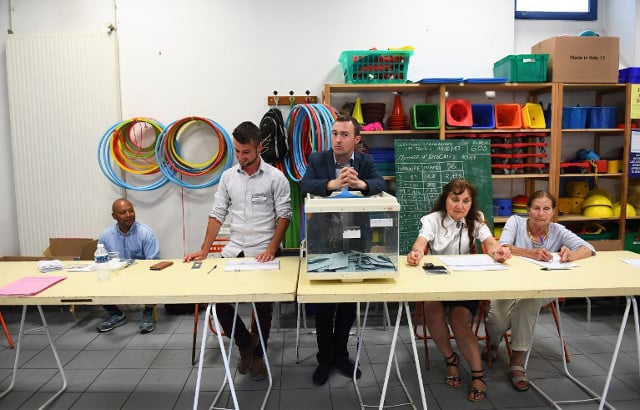 Where are they? Officials have to wait for voters at a polling station in France. AFP

The French are renowned worldwide for being political animals.

Their participation rates in elections are the envy of many countries. Over 77 percent voted in the first round of the presidential election on April 23rd and in 2012 the figure was over 80 percent in the second round.

But on Sunday only one in two voters bothered going to polling stations for elections that basically decide whether the president can actually do anything. In other words there's a lot at stake.

So why the low turn out?

France's 2016/ 2017 election season has been longer than the football season.

Some political analysts trying to explain why half the country’s voters didn’t bother to go to the polls referred to Sunday’s vote as the “seventh round of the presidential election”, with next week’s final vote being the “eighth round”.

Their point was of course to stress how many elections France has had in recent months.

It all started back in November when the right wing Republicans party held their primary, which was open to all voters. (Campaigning began in September!)

The primary was held over two rounds with over four million voters casting a ballot each time. Then in January the Socialist party held their own two round primary, although turn-out levels were much lower.

Then there was of course the key event, the presidential election, which was held over two rounds on April 23rd and May 7th.

So even though the parliamentary elections are very important for how the next five years pan out, we can hardly blame French voters for election fatigue.

“It’s been an extremely dense electoral period,” Edouard Lecerf from polling agency Kantar public told The Local. “For those who have followed the primaries, this was like the 7th round of the election. That’s a lot and it can accentuate the abstention rate.”

Do they really need two rounds each time?

While we know there is so much riding on who controls parliament, French voters don’t really act as though there is much at stake.

That’s because since 2000, when the move was made to move the elections to a month after the presidential elections, they have lost much of their importance and attractiveness as they are perceived as being mere confirmations by voters of their presidential vote a few weeks earlier.

Since 2002, French voters have consistently given new presidents a legislative majority, in a way that Lecerf describes as “functional” or “mechanical”. Turn-out has always been much lower for parliamentary elections in recent years (57 percent in 2012.)

Unlike the presidential elections, where voters are convinced everything is at stake (even though the president would have little power, without control of parliament) it appears French voters don't think there is much riding on the parliamentary elections, even those in 2017 where traditional political parties have been routed. (There were no high profile debates this time around. AFP)

Apart from posters in the streets, did you really notice there was an election campaign going on in recent months?

There were no mass rallies around the country, no live TV debates that had everyone glued to the screen and France’s top politics TV show Emission Politique was even scrapped recently because they could not persuade any guests to come on.

The campaign has been lost amid the coverage of President Macron’s emergence on the international scene after his high profile meetings with the likes of Donald Trump and Vladimir Putin. Terror attacks in the UK have also knocked politics of the top of French news sites in recent weeks.

Opinion polls in recent weeks have suggested Macron's party would dominate these elections, which will have undoubtedly demotivated many voters, especially all those who did not back him in the presidential election – remember 16 million French voters abstained or voted blank in the second round.

Part of the reason for the low turn-out is that many voters, who backed other candidates will have accepted defeat and although they may not like the new president or even bring themselves to vote for him, they want him to be able to govern.

A poll last week suggested 65 percent of French people wanted Macron’s party to get a majority, with most justifying it because they want the government to be able to govern. Only 14 percent actually agreed with what Macron stood for. The parliamentary elections were meant to be moment when France’s traditional right and left, both having suffered humiliating defeats in the first round of the presidential election, bounced back.

But the reality is both parties the Republicans and the Socialist party are still suffering internal divisions and identity crisis. Both parties struggled to come up with new coherent programmes after voters firmly rejected their presidential candidates. They both look old and tired and full of the same faces voters clearly chose to reject last month

Compared to Macron’s La Republique en Marche, which is full of fresh faces from civic life, both the Socialist party and the Republicans have failed to grasp that the French are seeking renewal.

Macron has of course not helped by naming a government including figures from across the political spectrum. With a Prime Minister and an Economy Minister from the right, many traditional right wing voters may have seen little point in voting for the Republicans. Anti-establishment voters fail to turn up

One of the most striking outcomes of the first round of the presidential election was how almost half of voters backed populist anti-establishment candidates, the two biggest of whom were of course the far right Marine Le Pen and the far left Jean-Luc Melenchon, who gained around 14.5 million votes between them.

But those voters were motivated by the very real chance their candidate could make it through to the second round, as Le Pen did, and perhaps even pull off a shock win.

However in the parliamentary elections there is clearly less at stake for these parties.

The National Front and Melenchon’s France Insoumise has found it hard to convince voters to help them gain what in reality would be no more than a handful of seats in parliament, which won’t really be of any use. Too much on offer

Anyone who has seen the long line of election posters in France’s streets will have been forgiven for being confused by the sheer amount of candidates fighting for a seat.

In all there were almost 8, 000, which meant an average of 14 candidates per seat, while in some areas there were as many as 25.

In many cases it was impossible to determine the differences between the candidates, most of whom are unknown to voters.

Kantar Public’s Lecerf called in a brouillage, meaning a “jamming” or “mixing up” that would have demotivated voters. So what the solution?

The far right Marine Le Pen believes France's winner-takes-all political system needs to change. She has long called for proportional representation, which would not only help her party gain a much bigger number of seats but would also help to motivate her voters to turn-out.

Kantar Public’s Edouard Lecerf said one possible fix could be to hold the parliamentary elections at the same time as the presidential elections.

Campaigning could be done on a national and local level and Lecerf points out that crucially voters won’t know the result of the presidential election when they vote.