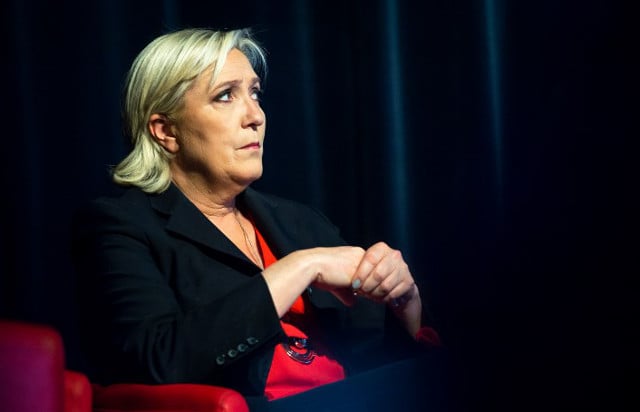 Photo: AFP
Le Pen won 10.7 million votes as she lost to Emmanuel Macron last month, but her party's first-round result on Sunday saw it falling way short of its aim of getting a stronger voice in parliament.
The anti-EU, anti-immigration National Front (FN) is on course to win between one and 10 seats in the 577-seat National Assembly in the June 18 runoff. It had been aiming to boost its current two seats to 15.
Le Pen blamed what she called a skewed electoral system that encouraged a record low turnout after projections showed that FN candidates scored between 13 and 14 percent of the vote.
She pointed to the fact that only around 49 percent of the electorate cast a ballot on Sunday — the lowest level in a parliamentary election in France for six decades.
“This catastrophic abstention rate should raise the question of the voting rules which keep millions of our compatriots away from the polling stations,” the 48-year-old said.
READ ALSO: FN vice president Florian Philippot said the party had “maybe been disappointed by the score and we have paid the price, I think, for a low turnout.”
The lion's share of the vote, as expected, went to the new centrist party of 39-year-old President Emmanuel Macron, Republique en Marche (Republic on the Move, REM), which could win as many as 445 seats.
The FN had set the 15-seat goal in order to qualify as a parliamentary group, a status that gives a party more clout in the National Assembly with seats on committees and a role in setting the agenda.
'We are real opposition'
The FN leader is currently a lawmaker in the European Parliament but is hoping to win a legislative seat in France for the first time.
She at least made it easily into the run-off in the northern town of Henin-Beaumont against 12 rivals and will fight a political novice from Macron's party, Anne Roquet.
Lise Trolin, a 32-year-old saleswoman who was among around 200 FN party stalwarts who gathered to watch the results in the depressed former mining town, tried to put a brave face on the national result.
“It's not a failure,” she told AFP. “We will be the only opposition force in the assembly because the Macron government is a melting pot of all the other parties. We will be the only force with enough guts to challenge Macron.”
Pensioner Marie-Christine Laversin, 57, said while she was disappointed, she thought FN voters would turn out in greater numbers next Sunday.
“People don't realise that what they can expect with Emmanuel Macron is that very well-off people will become even wealthier and the poor will get poorer. What I fear a bit with Macron is, if the FN is not in the assembly, we're done for.”
Le Pen and the FN have benefitted from a confluence of factors including the 2015 migrant crisis and the string of jihadist attacks that have hit France.
The party has a particular populist appeal in France's northern rustbelt, which is dotted with shut-down factories and mines.
In the presidential vote, Le Pen aimed to capitalise on the same rejection of traditional politics that swept Donald Trump to the White House and sparked Britain's vote to leave the EU.
She was roundly criticised for a poor performance in a brutal TV debate with Macron days before the presidential runoff that potentially cost her votes.
“The National Front has not recovered from the period between the two rounds (of the presidential election) and its successive mess-ups,” Brice Teinturier of the Ipsos polling institute said on France 2 TV.
Le Pen has spent the past six years since taking charge of the FN trying to expunge the xenophobic, anti-Semitic ethos engendered by her father Jean-Marie Le Pen, who co-founded the party in 1972.
Under Marine Le Pen, the FN has consistently improved its electoral scores, notching up records in past regional, European Parliament and presidential elections.